Former Beacon school board president Melissa Thompson, who stepped down this month after choosing not to seek re-election, has filed a federal complaint against the district alleging racial discrimination and “carelessness” in its treatment of her special-needs son.

Thompson’s complaint, filed May 20 with the U.S. Office for Civil Rights (OCR), alleged that her son, a recent graduate of Beacon High School, lost out on potential athletic scholarships after school officials failed to acknowledge a learning disability that led to falling grades and his removal from the National Honor Society.

Thompson, who served on the school board for nine years, including the last three as its president, said she hoped her complaint would focus attention on one aspect of what she called a “broken” district. 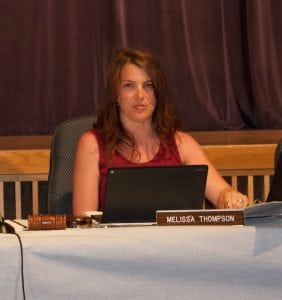 “There’s a degree of carelessness with regard to children with [special needs],” she told The Current. While she said there are people in the district “who work very hard for our children who learn differently,” she added, “I can’t say that all do, and that’s a sad thing. I filed this on behalf of my son, but it’s really about all kids that need an extra hand.”

Citing racial discrimination as well (Thompson’s son is African-American), she wrote in the OCR filing that she believes the “climate that presides in the Beacon City School District is one that has caught my son in the crosshairs and has adversely impacted his educational experience at Beacon High School.”

Thompson’s complaint alleged that Beacon teachers and administrators failed to accommodate her son’s “504” — a plan drawn up to help students with learning and attention issues participate in the classroom — even after it was brought to their attention.

She also claimed her son’s teachers showed little concern when his grades fell, which she believes was discriminatory. She says her son told her: “I am brown and I am passing. Nobody cares about me.”

A spokesperson for the U.S Department of Education could not say if OCR would investigate the complaint. Thompson, however, said the agency has told her it will proceed.

Beacon school officials declined comment, saying the district had not received a copy of the complaint. Anthony White, who was elected as school board president on July 5, said that he, too, had yet to see it “in a school-system capacity.”

Now that her son has graduated, Thompson called his situation a “non-issue” but indicated that she still wants the OCR to audit the Beacon district’s approach to special-needs students “for the benefit of all children that hold a 504 or IEP” — an  Individualized Education Program, another tool used to assist special-needs students.

Thompson said that she decided to file the OCR complaint after receiving a letter from the Beacon Educational Administrators’ Association in May suggesting that she was “attempting to use [her] power as a board member to unfairly advantage [her] child … creating a conflict of interest in [her] roles as board president and as a parent.”

“When they finally accused me of harassment, that was the final straw,” she said.

When asked how such allegedly glaring deficiencies could have occurred during her near-decade on the Beacon school board, Thompson said: “I was one out of nine. There was very little time to be proactive toward enriching programs for our kids because the board spent so much time reacting to the current events of the district.”

Her complaint is the latest in a series of high-profile events that have battered the Beacon school system over the past 12 months.

One Beacon parent, Melissa Rutkoske, who is the wife of newly elected school board member Michael Rutkoske, filed a petition last year with the state Education Department, calling for the dismissal of then-Superintendent Barbara Walkley and school system attorney Michael Lambert. Walkley resigned in January, marking the sixth time the superintendent’s seat has been vacated — not including interim heads — since 2006.

Thompson said she plans to make a public statement at the July 18 board meeting.

“I want them to understand the degree to which the system is broken,” she said. “There are many, many kids like this. They’re passing, but are we really giving them the tools to be successful at the next level?”