Winding around Fishkill Creek, through parts of east Main (the section) and East Main (the street), Beacon’s Ward 4 could be the city’s most diverse.

Ali Muhammad, the ward’s 28-year-old City Council representative, knows every inch of it.

“I know a lot of the people who have grown up here,” he says, walking down Tioronda Avenue. “I know a lot of their families.” Every minute or two, he pauses to wave as someone drives by. He greets every person he passes on the street, even if he doesn’t know then, although chances are he does. “I want for my brother and sister what I want for myself,” he says. “Why not be friendly? Walking down Main Street is difficult sometimes [because he sees so many people], but then again it’s great.” 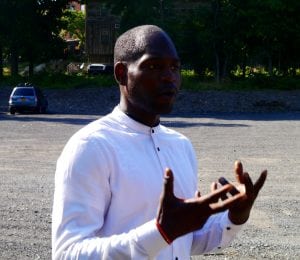 Ali Muhammad during a walk around Ward 4 (photo by J. Simms)

His ward includes 1 East Main, which may ultimately be the city’s most high-profile housing development. Another large housing complex is also planned nearby on Tioronda.

“The management of our development and our growth is so important,” Muhammad says. “Fifteen years ago we didn’t have that issue when I wasn’t allowed to walk down Main Street. There was nothing there. It was all boarded up.”

Now he worries that his constituents, as well as residents citywide, may one day not be able to afford Beacon. “Things are changing because of the people who are moving here, because they’re spending money,” he says. Pointing at 1 East Main, he adds: “These factories were here already, and some people took the initiative and had the vision to change it. There’s so much more now, but how do we make sure that people aren’t priced out?”

The answer is not immediately evident, but for Muhammad it begins, at least, with participation. “We have so many underserved communities and it’s extremely important to represent them,” he says. “I’m from here and I care about this community. The more we put into our city, the better outcome there is. I’ve grown up here and I see the difference.”

Ward 4 also includes University Settlement and Mt. Beacon, which, along with its riverside area, are perhaps the city’s most vivid representations of its unique natural environment. “Between the river and the mountain there’s so much energy and so much possible connectivity,” Muhammad says.

There’s also “new” and “old” Beacon — words Muhammad says he doesn’t like. “This is not ‘old’ Beacon, this is not ‘new’ Beacon,” he says. “It’s Beacon, New York. We’re 15,000 people strong and we all have to participate.” He stops again to greet someone on the street.

Muhammad is excited about the possibility of a pocket park being created on land donated to the city behind 1 East Main and the site of an up-and-coming brewery. The development and commerce represent Beacon and his ward’s continued growth, while he envisions the park as a place where all of those people, new and old, can come together.

Like other council representatives, Muhammad is adamant that the continued success of Main Street is the key to the city’s future. Recalling again the deserted Main Street of his youth, he notes there are now 75-plus businesses along Beacon’s  primary thoroughfare.

Parking is an issue in Ward 4, as it is throughout the city. Muhammad believes business owners should be educated to park elsewhere rather than take up a Main Street space for hours at a time. Two-hour parking limits should be enforced too, he says. Calling his ward the city’s “entertainment district,” Muhammad says his vision for 15 years from now is a thriving Main Street, more affordable housing and more and better activities for young people.

“This is the most beautiful ward, in my opinion,” he says. “We have a lot of arts and culture here. And this is better than it was 15 years ago. It’s safer than it was.”

He stops to greet a driver who slows and honks.

“We can come together and embrace one another,” he says. “But you can’t just stay home. Get offline and get to know your neighbor.”

One thought on “Walking Ward 4 in Beacon”