Legal counsel will be put out to bid

Moments after being sworn in on July 5, the three new members of the Beacon Board of Education wasted little time in reshuffling the deck.

Meredith Heuer, Michael Rutkoske and Antony Tseng each received applause from audience members — a number of whom were armed with signs with phrases like  “New Board New Beginning” and “Yes We Can.” The trio replaced former members Melissa Thompson, Christine Galbo and Tracy Antalek Everett. The board must still fill a vacancy created by the resignation of Jose Munoz at its last meeting.

After Anthony White (with Bill Zopf and Frank Garnot dissenting) and Kenya Gadsden (unanimous) were elected as president and vice president, respectively, the three new members offered rapid-fire motions to consider new legal counsel for the district while also addressing the vacancy and the district’s ongoing superintendent search. 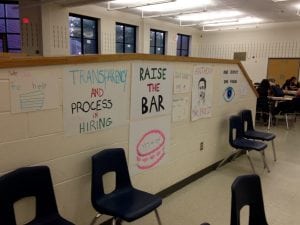 Audience artwork at the Beacon school board meeting. (Photo by J. Simms)

Tseng made the motion for the district to issue a request for proposals (RFP) for legal counsel. The motion passed unanimously, and the RFP will be issued this week, interim Superintendent Ann Marie Quartironi said.

Later in the meeting, the district’s agreement with its current counsel of Shaw, Perelson, May & Lambert, LLP, was extended for a year — with the provision that the agreement can be terminated with a 60-day notice.

The eight members of the board will discuss options for filling Munoz’s vacancy at their next meeting on July 18. Tseng suggested that the board hold a hearing    to gather public input as well.

“We need to rebuild trust between the board and the community,” he said. “Will they trust us enough to do an appointment [for the vacant seat] … or is a special election the only way … for them to trust us more?”

In addition, the board created a committee, with Heuer as its chair, to review RFPs that have been submitted from search firms hoping to be hired to recruit candidates for the district’s open superintendent position.