But estimates nearly double what was budgeted

The good news is that Cold Spring’s Tree Advisory Board is keeping close tabs on the health and well-being of the more than 400 village-owned trees that line the streets. The less-than-good news is that, like everything else, their care comes at a cost.

At the July 5 meeting of the village board, advisory board members Kory Riesterer and Charles Day presented a report that recommended the removal or pruning of five trees that are dying or have dead limbs. 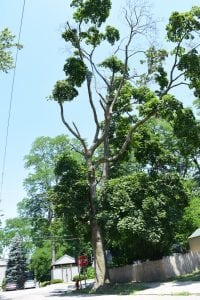 Dead branches on this maple tree on Garden Street present a hazard. (Photo by M. Turton)

The village budget includes $4,000 for tree removal, maintenance and replacement. The estimated cost of the work is $7,000 based on quotes from several tree-service companies.

The budget may be the lesser of two issues. “Once you identify liability and don’t do anything about it…,” Mayor Dave Merandy said, his voice trailing off. “We have to find the money somewhere.”

Merandy said he will check with Central Hudson for assistance. The utility provides pruning when its power lines are involved. Trustee Steve Voloto will inspect the trees to help determine priorities.

Jennifer Zwarich chairs the Tree Advisory Board. The other members are Tony Bardes and Gordon Robertson.