Art would be a “great way to emphasize what Cold Spring is all about: the creative community,” he says now. Plus, “the idea seemed a natural for the space and also who we are: local, blue chip — a boutique agency before that became trendy.” Since April, the real-estate office has displayed the work of a different artist each month, with multiple works sold and all revenue going to the artist.

July’s exhibit came about by chance, as former (former in this case meaning really former — more than 50 years ago) Haldane art teacher Bob Digiovanni was in the area and got together with his former student, McCaffrey, as he usually does when he visits. After Digiovanni showed McCaffrey a copy of one of his paintings, McCaffrey brought it over to his office and passed it around; everyone there thought it would be great to have an exhibit of his work. 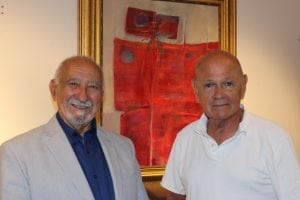 Bob Digiovanni and Bob McCaffrey at the opening of Digiovanni’s exhibit at McCaffrey Real Estate on July 1. (Photo by A. Rooney)

A week later, Digiovanni loaded his daughter’s Jeep with 11 of his paintings (all but one are recent works), drove to Cold Spring from his home in Massachusetts, and a day later the exhibit was hung, the doors opening with a reception on July 1.

It’s not the first Cold Spring exhibition for Digiovanni — the first time his work, around 25 paintings, was shown was at Butterfield Library in 1960. That capped off a three-year period living in Cold Spring and teaching art to all 13 grades at Haldane. His time here ended when he received a scholarship to pursue an M.F.A. at the University of Notre Dame. After receiving his degree, Digiovanni taught briefly at Lakeland Central School in Peekskill before returning to his native Boston area.

Digiovanni, who radiates the energy of someone decades younger, says his “love for Cold Spring has never wavered.” Noting that he “got to know all the students,” Digiovanni described them as “wonderful. There were no drugs or alcohol back then that I saw. Main Street was pretty dead then, very quiet, very peaceful — except for McCaffrey’s Bar, of course.” (Hussong explained: “It’s Whistling Willie’s now. Bob grew up above his father’s bar.”)

Although he is still in touch with many students from the years he taught, Digiovanni is unaware of any teaching colleagues still around with the exception of Frank Milkovich, who retired as assistant to the superintendent (and, before that, as principal) of the Haldane School District in 1988 after 32 years affiliated with the school. Milkovich is still active with the Cold Spring Lions Club.

After his return to Massachusetts, Digiovanni switched to college-level teaching, working for two decades at Boston State College, and then Bunker Hill Community College. In between those jobs he had a six-month stretch of unemployment — his first encounter with it. Feeling low, he was receptive when his daughter suggested they travel to Egypt for three weeks. They had a wonderful time — “I got rid of my angst,” Digiovanni says — and that trip spurred the travel bug.

Digiovanni has since explored both Europe and the U.S., all reflected in his paintings, which include the abstracted geography of places as disparate as a Roman-built viaduct in Luxembourg, sunset at Florida’s Pompano Beach, spring in Sicily, as well as the sands of Egypt. He’s very much looking forward to his next trip, to Norway. Throughout his teaching life his work was exhibited in shows at educational institutions, arts associations and at Boston Gallery Seven, all in the Boston area. 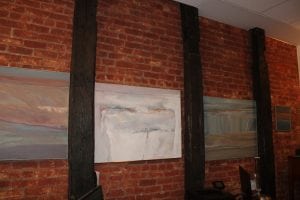 The other artists who have exhibited at McCaffrey’s are George Stevenson, Rick Thurston and Daisy De Puthod. Hussong says most visitors come in for real estate but then engage with the work, which, until this exhibit, has largely reflected local landscapes and scenes. One McCaffrey agent purchased a work for her client, considering it a perfect welcome-to-the-neighborhood gift.

Asked what Bob McCaffrey was like in high school, Digiovanni had only good things to say, “He was the most endearing student.  His nickname was ‘Bumpy’ and, well, he looked like an angel. I remember that every time I complimented him he would turn beet red. He was the most popular student in the grade.”

The Digiovanni exhibit runs through July during regular business hours at 140 Main St. For more information visit mccaffreyrealty.com or call 845-265-4113.

One thought on “McCaffrey Realty Doubles as a Gallery”