Scenic Hudson’s monthly, seasonal guided tours of its West Point Foundry Preserve have been exceedingly popular since their inception in 2014. To supplement these first Saturday of the month offerings, this summer it will be conducting two night-time “lantern tours” on Tuesday, July 19, and Thursday, Aug. 18, to illuminate the striking ruins of the 19th-century manufacturing complex.

“People never get to see the preserve at night, but it operated 24 hours a day, at least during the Civil War,” explained Reed Sparling, who will conduct the tours and also leads the daytime tours along with Cold Spring’s Mark Forlow. He will share voices of a newspaper reporter, painter John Ferguson Weir (whose notebooks, Sparling says, “contain wonderful accounts of the inside of the casting”) and foundry employees. 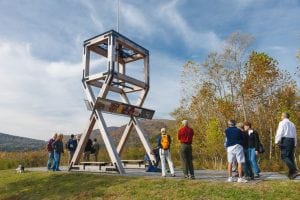 “We’ve been asked if it’s going to be a ghost tour,” he says. “There are no accounts of ghost sightings, but I found an account that one young apprentice was killed there by a cannon discharge, and, of course, there were many killed elsewhere” by weapons, such as the Parrott Gun, made at the foundry.

The lantern tours will take place under full moons to provide as much illumination as possible. The lanterns themselves, lit not by flames as they once were but looking enough like the originals to evoke the era, were tested at a recent Scenic Hudson benefit held at the Foundry. The lantern tours are free, but reservations are essential, as, with a maximum of 25 participants, they’ll likely fill quickly.

Sparling urges those unable to attend these programs to come along to one of the daytime tours, which require no advance registration and — thus far — no one has been turned away. Offered on Aug. 6 and Sept. 3, the tours give participants “a good nuts-and-bolts history of the Foundry and the work that Scenic Hudson has done to preserve it,” Sparling says. 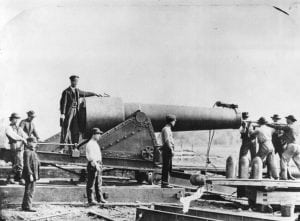 He says visitors tend to be transfixed by his fellow guide, Mark Forlow, whom many in Philipstown know from his presentations at Putnam History Museum. “People listen to his every word,” Sparling says. “He has such great knowledge.  We relate a lot there through the story of the Parrott Gun.”

Sparling says that tour participants have come from all over New York state and the surrounding region, and that quite a few locals have signed on, many expressing surprise at the site, having never explored it. As the guides note on the tour, usually both the Chapel Restoration and the Putnam History Museum are open and can easily be combined with a foundry tour.

Neither tour has a minimum age requirement. While the lantern tours might prove a little tricky for those with walking or visual difficulties, the day tours are fully accessible, with a detour at the end for those unable to climb a set of steps. The 90-minute day tours, also free, begin at 11 a.m. in the preserve’s parking lot at 68 Kemble Ave. 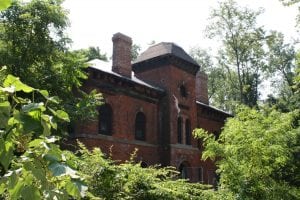 Scenic Hudson acquired the 86-acre property in 1996 to safeguard the foundry’s remains. A trail connects it with Cold Spring’s Metro-North station, so visitors arriving by train can easily reach it. Scenic Hudson has also developed a self-guided mobile tour that allows people to experience the foundry digitally through narration, sound effects and historic photographs. See foundrytour.org.

Scenic Hudson runs programs and workshops for children over the summer, many at Beacon’s Long Dock Park. They include creating nature journals and sketching nature, along with family fishing night. The organization is also looking for volunteers to assist with mugwort removal at the park and invasive plant removal at Madam Brett Park in Beacon. For details, visit scenichudson.org/events.

One thought on “Shedding Light on an Historic Site”