Cold Spring vet concerned about what many dogs eat

By one estimate Americans spend $45 billion annually on dog food and another $6 billion on treats. And yet, not all dog food is created equal. Dr. Peter Bach of the Animal Hospital of Cold Spring has expressed concern about what many dogs are being fed, so we asked him for more details. His responses have been edited for space.

It should contain a high amount of protein and a small amount of fat. Also roughage, which is not the same kind of fiber that humans consume. It should be probiotic, with a type of bacteria that normally grows in the gut that is sometimes missing from the animal’s gut. It should also include vitamins and minerals but not many carbohydrates — maybe about 6 percent carbs — which is very hard to find [in dog foods]. 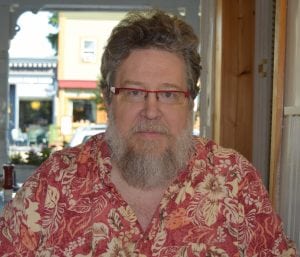 Do dietary needs vary much from breed to breed, other than amounts?

A working dog needs a lot more calories than a dog that basically sits with the owner and watches TV all day.

What are common mistakes owners make regarding diet?

They fall into traps. The industry is overselling the concept of a grain-free diet. They should actually be promoting carbohydrate-free diets. Another mistake is using a raw diet that is not freshly made. Nothing against raw diets, but most of the commercial food contains too much bacteria and it’s often harmful to both the pet and the human. Home-cooked meals often don’t contain the right amount of trace nutrients and vitamins.

And finally, just feeding a dog scraps from the table — what our grandparents and parents used to do — does not increase the animal’s longevity. Scraps contain too many fats, especially saturated fats, and too many of the sugars and carbs found in most North American diets. I understand the owners desire to share and to give in to begging, but it’s not actually a good thing.

Is part of the problem that pet owners tend to anthropomorphize their dogs?

That’s an issue in all aspects of veterinarian medicine and dog ownership. But you cannot take that out of humans. It’s one of the hardest things for me to explain to people — don’t overfeed an animal, and don’t just give in to what you think the dog’s needs might be as a substitute for love. Human-grade protein — muscle meat — is not necessary in dog food. They can have a lower-grade protein. 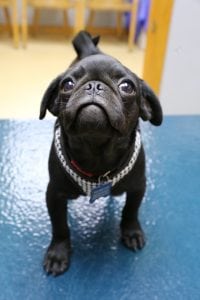 The nutrients that a dog needs are counterintuitive; it needs nutrients to make hair; it needs to constantly renew its nails; it needs roughage that you would probably consider unacceptable food at your table. A dog needs that fiber to have good, healthy bowel movements and so forth. And no,  Fluffy should not eat until he bursts. Just because he demands food three times a day doesn’t mean he needs it.

What do dogs need?

They typically don’t get enough exercise. There’s a study that says that dogs should have a type of enhancement, some life enrichment by having a walk once or twice a day. Just letting him out into the back yard to sniff and poop is not an enrichment; they know all the smells in the backyard. They need something different than the ordinary daily life of the human — a nice walk in a neighborhood they haven’t been to before or at least a chance to check out their neighborhood to see who has been there and what’s going on. Dogs decline mentally if they don’t have that type of enrichment.

What do you recommend as a nutritious treat for dogs?

Are organic foods showing up in canine diets?

I’m sure it is but there’s no research to support that it’s necessary. There’s absolutely nothing that I’m aware of that says organic foods will increase a dog’s longevity or make them healthier. It stands to reason that the things that make our life better also make the dog’s life better. 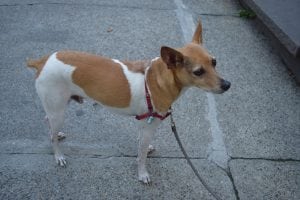 Bug, a rat terrier, is a frequent pedestrian in Cold Spring. (Photo by M. Turton)

But there are differences. Cadmium, for example, is a toxin for humans but doesn’t play a role in dog’s kidneys; they don’t collect cadmium. So maybe all toxins we humans worry about are not detrimental to a dog’s health. Didn’t we just talk about anthropomorphism?

What about wet versus dry food?

I’m more concerned about the content of the wet food than the dry food. If we were talking about a cat I’d give you a completely different answer, but for dogs, it’s not as important since dogs drink sufficiently.  It becomes a convenience issue for the owner. Dry food you can put out and leave out all day and the canned food, at least in the summer, attracts all kinds of bugs and things. There’s not really a big difference nutrition-wise, unlike cats, which need the canned food.

The American Veterinary Medical Association commissioned a study that found that the biggest objection to raw diets is the bacteria that is often found. Also raw diets aren’t very well researched. Some people do no research and just use their gut instinct to add things that are indigestible in dogs. 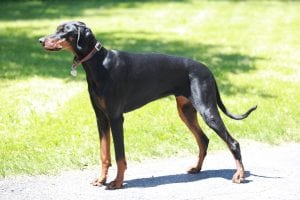 Cottage cheese, for instance. It sounds like a great idea to put it in dog food but the University of Pennsylvania’s senior canine nutritionist has shown it does not work in dog food. It sounds good; kind of warm and fuzzy, but it isn’t a dog food.

The core of my objection to small manufacturers is that they have no idea what to put in dog food. This is a little bit exaggerated; but the standard for trials in dog food is that if the dog is fed for six weeks and doesn’t die, the dog food passes. The AFFCO [Association of American Feed Control Officials] standards are not very tight and stringent.

How common are food allergies in dogs?

Lately they’re becoming a big thing and much more common than environmental allergies. Pollen and carpet cleaners are also big but food allergies really trump everything else. 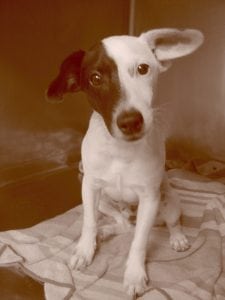 What should people do to plan their dog’s diet? Search online?

Research online is at the point where anybody can publish anything. It’s more disturbing than good. I like to have people start by talking to me about diet concerns. I’m very open minded but I’m not for a raw diet and I’m not for a high amount of table scraps. I can also provide recipes.

Dogs that eat food from a company that does its own research live the longest. Research looks at what micronutrients and vitamins are needed and what diseases the dogs get, and they design their dog food based on that research. There are at least three such companies doing that, including Purina, Waltham and Hills.