The Downing Film Center on the Newburgh waterfront will celebrate its 10th anniversary on July 22. It showed its first film, Water, directed by Deepa Mehta, on July 22, 2006, in what had been the basement of a furniture warehouse and later the Yellow Bird Gallery.

The 55-seat Downing will mark the anniversary with two screenings of the Academy Award–winning film Cinema Paradiso (1988), Giuseppe Tornatore’s classic celebration of the magic of the movies, at 2 and 7:30 p.m. on Monday, July 18. Admission is $5, or free for Downing members. 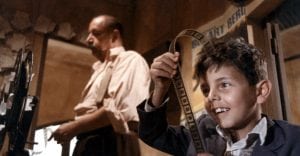 A scene from the 1988 film Cinema Paradiso

In addition, from Friday, July 22, through Thursday, July 28, ticket prices will drop to their 2006 levels for other films: $8 for adults, $7 for students and members of the military, $6 for seniors and children under 16, and $5 for Downing members. The price of popcorn will also be reduced to its opening-day price of $2.

Tickets are available at the box office at 19 Front St. during movie hours, as well as at downingfilmcenter.com. For more information, call 845-561-3686. Seating is on a first-come, first-served basis.