The City of Beacon Fire Department fought a house fire on July 12 at 9 Crescent Drive and rescued about 50 cats inside. The home’s occupant was not injured. 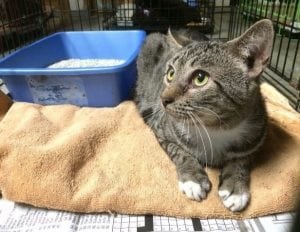 The department received an alarm at 7:07 p.m.; the first engine was on the scene at 7:10. Three firefighters entered the home in search of someone possibly inside and discovered the fire in the kitchen. That was quickly extinguished but a search was conducted on the first floor and basement. Personnel on the scene administered first aid. Seven cats died of smoke inhalation and 47 others were transported to the Mid Hudson Animal Aid shelter. Live traps were set up to retrieve the 16 cats who escaped the home.

Two volunteer firefighters were injured by the cats while removing them; they were treated at St. Luke’s Hospital. 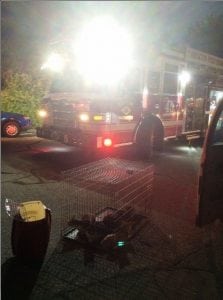 Cats in a cage at the fire scene  (MHAA photo)

The fire was contained to the kitchen and attic. The home’s occupant received assistance and lodging from the Red Cross. County Car 17, the City of Beacon Police, Beacon Volunteer Ambulance and Mobile Life Support, the City of Beacon building inspector and the Dutchess County Fire Investigation Team assisted at the scene. Firefighters from Fishkill, Glenham and Rombout were on the scene, and those from Chelsea and Hughsonville covered at Beacon Fire Station 2.

Mid Hudson Animal Aid has established a fund online to pay for the costs of housing the rescued animals. Visit youcaring.com. As of Thursday, nearly $5,000 had been donated of the estimated $18,000 needed over the next month to care for the cats, many of which have fleas and need treatment for infections and dermatitis. The center, located at 54 Simmons Lane, also needs small Styrofoam bowls, small foil pans, bags of dry food and volunteers for clean-up.