The U.S. Coast Guard is considering 10 sites for overnight barge parking lots, called anchorage grounds, on the Hudson River between Yonkers and Kingston, including 445 acres between Beacon and Newburgh, an area large enough to berth up to five barges.

There is currently only a single anchorage ground, near Hyde Park, along the 100-mile river stretch from New York City to Albany, which the Coast Guard says raises safety concerns.

“It’s just like driving a big-rig truck, you’re under stress and time is money,” explained Lt. Karen Kutkiewicz, a spokesperson with the First Coast Guard District in Boston. “Companies want to drive through, but that’s not safe. There needs to be a safe place for them to drop the hook for the night and then continue on their voyage. Especially when there’s ice on the river and then it’s an even slower transit.” 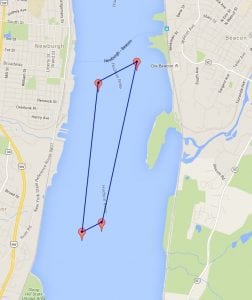 The ”barge parking lot” on the Hudson between Beacon and Newburgh that is among those proposed by the Coast Guard. Each barge would have a swing radius of about 1,800 feet. (Google Maps)

Although the proposal is at its earliest stage of development, it has drawn concern from municipalities and environmental groups, which have requested public hearings.

“It would certainly be an eyesore for us, as it would affect our viewshed,” said Beacon Councilmember George Mansfield. “It also would affect our access to the river, kayaks, fish habitats, and the levels of noise and light pollution. There’s really no upside in it for us.”

Mansfield said Mayor Randy Casale had sent a written request to the Coast Guard for a public hearing and also was discussing the issue with other mayors.

Although the deadline for a public meeting request was June 30, Kutkiewicz, told The Current there “absolutely” would be public hearings in 2017.

“We have input from the commercial mariners of where they think would be the best for them and their crews, but we’re also taking into consideration the public that lives along the Hudson,” she said. “We’re looking forward to hearing from them and hearing ‘Hey this might be a good spot, and this might not be such a good spot.’ So we’re welcoming comments from any interested parties, whether they’re along the Hudson or not, local environmental groups, maritime waterway users that aren’t commercial users, property owners, and all other possible stakeholders.”

John Lipscomb, captain of the Riverkeeper Patrol, is skeptical of that assessment. “As a riverboat captain, I’m very interested in safety,” he said while collecting water samples from the Hudson near the Tarrytown Lighthouse. “But safety is often used as a catch-all for development.”

Lipscomb was quick to point out that neither he nor Riverkeeper are necessarily against the proposal, at least so far. “We don’t want to say no before the conversation even starts,” he said. “But we’re fairly confident that of all the proposed anchorage grounds, we will probably say no to several of them.”

There are three reasons to object to some proposed sites, he said. The first involves the increase in noise and light pollution that barges berthed overnight in the river would cause, especially along narrower and less populated areas. For many years, until the fall of 2015, barges would illegally anchor near Port Ewen and Rhinecliff until the generator noise and bright lights caused complaints that brought the barges to the attention of Riverkeeper and the Coast Guard.

The second reason involves the environmental impact caused by the barge’s ground tackle — the nautical term for the anchor and chain — raking across the river bottom. Because the Hudson is a tidal river, the vessels swing to the rhythms of the tide when berthed, causing the ground tackle to further scour the river bottom. That may cause problems on stretches of the river between Poughkeepsie and Albany that serve as habitat for the bottom-dwelling Atlantic and shortnose sturgeon.

Riverkeeper has been working with researchers using sonar to survey sturgeon grounds. “The researchers can see that the anchor scours off of Port Ewen, which was being used illegally until October 2015, are still there, virtually unchanged,” said Lipscomb. “The effect doesn’t quickly go away.”

What is unknown is whether disrupting the river bottom has any negative impact on the sturgeon. “What’s required here, is before we start using the river to park barges, is we have to find out how those anchor scours affect endangered species,” said Lipscomb. “Both Atlantic and shortnose sturgeon are endangered, and under the Endangered Species Act, you can’t negatively affect their habitat.”

The final and most pressing reason involves the cargo on most of the berthed barges. The Tug & Barge Committee of the Port of New York and New Jersey, in a letter dated Jan. 21 in which it requested more anchorage grounds on the Hudson, the port at Albany is referred to as a leading export port for trade of crude oil and ethanol from the Bakken field in North Dakota. “Trade will increase on the Hudson River significantly over the next few years with the lifting of the ban on American crude exports for foreign trade and federally designated anchorages are key to supporting trade,” the letter stated.

Lipscomb responded: “Anything that facilitates more transport of crude oil on the Hudson is not a good risk. What we’ve learned from studying spills of Bakken oil into moving waterways is that there’s no recovery. It’s very light, so it mixes into the water column very quickly. So you have response, but no recovery.”

Although it’s possible that increased anchorage grounds would lead to an increase in safety and therefore a decrease in the possibility of a spill, Lipscomb wondered why, if additional anchorage grounds were so badly needed, the site in Hyde Park wasn’t always full.

“The Hyde Park anchorage is authorized for up to three vessels,” he said. “I’ve been operating this boat for 16 years, going by that spot at least twice a month, and I’ve never seen three vessels there. The port of Albany evolved as a receiving port for oil, but now it’s also an export facility. They haven’t built any new tanks or docks. The docks are doing double duty. So is this about safety, or is this proposal a way of parking barges in public anchorages while they wait for the port of Albany to have room?”

Lipscomb suggested the solution may be to increase the facilities at the port. “If I’m a school bus operator with 75 buses that I don’t use over the summer and on weekends, do I park them on public streets when I’m not using them?” he asked. “Or do I keep them in a facility that I own and maintain?”

Lipscomb said that Riverkeeper would be urging the public to comment on the proposed rules before the Sept. 7 deadline. In this instance, he and Lt. Kutkiewicz were in agreement.

“We need more comments,” said Kutkiewicz. “Especially from the homeowners and property owners in the Hudson Valley.”

To comment, visit regulations.gov. As of July 14, sixty-six comments had been received.