This year 134 players from ages 6 to 16 participated in Philipstown Little League in four divisions, and 26 adult board members, officers, managers and coaches volunteered their time.

The league’s 12-and-under team included 13 players, four of whom were returning from last year’s team:

Its first game was against Pawling. Starting pitcher Daniel Santos backed by good fielding pitched three scoreless innings. Meanwhile, Philipstown’s hitters knocked in two runs in the top of the first inning and had the bases loaded with one out in the second. But Pawling pitched around the threat and Philipstown didn’t score again until the sixth.

Meanwhile, Pawling rallied for eight runs in the fourth inning and three more in the fifth to build up an insurmountable lead. A two-run homer by Darrin Santos in the sixth was too little, too late and the All Stars fell, 11-4.  The next game the team ran into a first-rate pitcher who shut them out, 7-0.

The team’s best game was June 30 at home against Taconic, which scored on a two-run home run in the first inning but was held to only one run after that by pitchers Julian Ambrose, Terence Driscoll and Daniel Santos. They were backed by excellent outfield and infield relays cutting down a runner trying to stretch a double to a triple — Ryan Merritt to Kevin Van Tassel to Blake Bolte — and a runner trying to stretch a single to a double — Julian Ambrose to William Bradley. 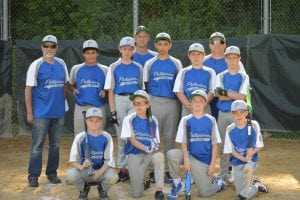 The 12U Philipstown All-Stars, sponsored by Appalachian Market (Photo by Kristin Van Tassel).

The team played virtually error-free defense. Taconic’s third run was disputed (the runner appeared to have failed to tag on a line out to left fielder Soren Holmbo). Philipstown scored in the fourth and had the tying run on third with one out. In the sixth, Philipstown had runners on second and third after a daring double steal, but the Taconic pitcher closed the game out.

In the final game, against LaGrange, Jonathan Bradley hit a home run in the sixth but the opponent hit four home runs and their first two pitchers gave up only one hit, a first inning triple to Daniel Santos.