What’s in your summer book bag?

True, many adults have little downtime from work emails, and kids have long lists of required reading to complete for the next school year.

But the weather and the long days have unmistakably positive effects on how much we read. At no other time of year might you grab a few hours reading in natural light on the porch after work, or before the rest of the house wakes up. “One benefit of summer was that each day we had more light to read by,” observes Jeannette Walls, author of the intense childhood memoir, The Glass Castle.

If you don’t have air conditioning, our public libraries do, as well as staff and staff-picked lists and displays that can help you find something new to read, for free. P.S. Books are easier to read outdoors than screens.

A few locals shared their reading choices, and how they came to them, with The Current last week. 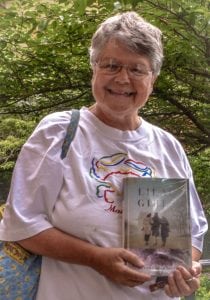 Janine Ravase just took home Lilac Girls from Butterfield Library in Cold Spring. It was on a list of recommended books by the Mount St. Mary College at Desmond/Newburgh, where Ravase studies in the core adult program. Lilac Girls is author Martha Kelly’s first book, based on the real World War II story of an American socialite who rescues Polish women. 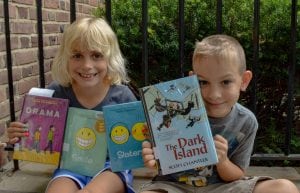 Josephine and Henry Foley-Hedlund show a few of the dozens of books they took out of the Butterfield Library in one day. (Photo by A. Peltonen)

Voracious young readers Josephine and Henry Foley-Hedlund stock up at Butterfield by the bagful. Henry checked out and dove right into The Dark Island, part of Scott Chantler’s Three Thieves graphic-novel series. Josephine planned to hunker down with The Girl is Murder, set in 1942, about a teenager who does detective work to help her dad after he comes home injured from the war. 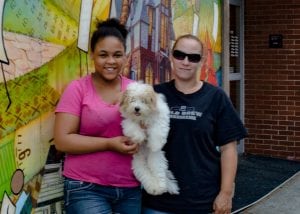 Taking turns sitting with their dog Puggie outside Howland Public Library on Beacon’s Main St. this week were Natacha Laboy and daughter Kaylasha Fryar. Laboy says most of the reading she does is mandatory material for work, such as Windows manuals and marketing books; she’s a shift director at Dunkin Donuts near Newburgh, in training to be an assistant manager. When she was a child, she loved the Goosebumps books. Today she still loves scary stories, especially military ones.

Fryar used to like books like Drama Queen but is now heavily into Manga, Japanese graphic novels with young superheroes, demons, and royalty. They borrow everything from Beacon’s Howland Library, which, like Butterfield in Cold Spring and every other library in the Mid-Hudson Library System, lets you borrow from its shelves or from the entire system’s interlibrary loan system. Request books will be sent to your home library. 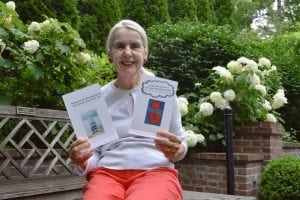 Prolific reader Patsy Johnson has Before the Fall and The Girls from Butterfield Library. Shown here in Butterfield’s reading garden. (Photo by A. Peltonen)

Patsy Johnson is settling down with two books from Butterfield this week: Before the Fall, an intrigue involving a plane crash off Martha’s Vineyard, and The Girls: A Novel, which the New York Times calls: “A seductive and arresting coming-of-age story hinged on Charles Manson.” Johnson gets her book recommendations from the Times’ and other book reviews. 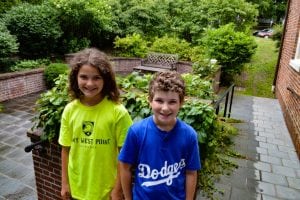 Olivia and Ben Hayes are into the Who Was?, What Was?, Where Is? children’ nonfiction series. Shown in reading garden of the Butterfield Library. (Photo by A. Peltonen)

The Hayes children, Olivia and Ben, are deep into Butterfield’s Who Was? What Was? Where Is? nonfiction series for young readers. They started off with titles Who Was George Washington? Olivia was reading Who is George Lucas? “because I’m really into Star Wars. It’s an easy read but a good one.” Ben is going to read What Were the Twin Towers?

Finally, Cold Spring librarian Jess Rozman, a serious nonfiction fan, has been reading In the Darkroom by Susan Faludi, Secondhand Time: The Last of the Soviets, and, perhaps because it’s summer, one new novel, The Little Red Chairs by acclaimed Irish author Edna O’Brien.