On Thursday, July 21, at 7 p.m. two novelists, Marta Elva and Patricia King (who writes as Annamaria Alfieri), will return to the Desmond-Fish Library in Garrison to discuss their latest books in a joint appearance. Signed copies of Elva’s American Tumbleweeds and King’s Strange Gods will be available for purchase. 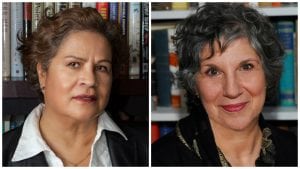 Elva’s novel tells the story of a Mexican-American family’s struggle to stay together as tradition collides with the social upheaval of 1960s America. Elva was born in Ciudad Juárez, Mexico, and raised in El Paso, Texas. A Florida resident, she and her family formerly lived in Garrison.

King writes historical mysteries; her current series is set in British East Africa, beginning in 1911. The stories capture the beauty and the danger of the African wilderness and the complexities of imposing a culture on a foreign land. Her five books on business subjects include Never Work for a Jerk. She lives in New York City and is a member of the board of the Hudson Valley Shakespeare Festival.

The library is located at the corner of routes 403 and 9D.