Thinking about taking a dip in one of the county’s many lakes this summer? Better make sure the beach is open first. Algal blooms that can cause skin irritation and stomach issues like vomiting and diarrhea are forcing the Putnam County Department of Health to close some beaches for swimming. The agency reports that six beaches in Putnam County have been closed so far this summer, and it’s part of a worsening trend.

Algae live in all freshwater lakes and usually coexist happily as part of the lake’s ecosystem with people and animals. Harmful algae form when nutrients in the lake get too high from some external source and the algae overgrows. Phosphorus and nitrogen, both used in fertilizers, are key culprits behind blooms.

The harmful blooms are called blue-green algae, although they can be many colors. They contain cyanobacteria that are the health hazard. “To be safe residents should avoid contact with any water that has a floating covering or scum on its surface, is discolored or has an unpleasant odor,” said Robert Morris, the county’s director of environmental health. The water will look like it’s been painted. 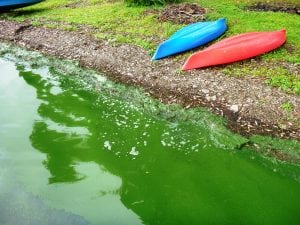 A beach in western New York with a harmful algal bloom. (Photo provided. )

The health department and state Department of Conservation (DEC) test water samples to determine the level of toxins. The DOH monitors beaches weekly and the DEC tracks harmful algal blooms statewide and works with communities to address the issues that cause them.

Rebecca Gorney, who coordinates the DEC’s Harmful Algal Blooms Program, has been in her post since last fall. It’s a new position created to address the growing problem. “Blooms are coming sooner, lasting longer and are more severe,” Gorney said. She credited better tracking and data collection to raising the profile of the problem. “We’re doing a better job of looking for them and the public is more aware.”

In Putnam County, the DEC statistics definitely demonstrate a worsening problem. In 2012, one bloom was recorded at Roaring Brook Lake in Putnam Valley. There have been more every year since, with seven lakes affected in 2015. The blooms last from three to nine weeks. Kirk Lake, Peach Lake, Lake Carmel, and Roaring Brook Lake have ongoing occurrences.

Algaecides, a class of pesticide, can be used to treat blooms, but they have to be approved by the DEC and rarely are. “Generally, a con is that they are a bandage-type of treatment,” said Gorney. “Treat it as you see it rather than treating the reason it’s happening. We have to think about what and where from the nutrients coming into lake. It’s also expensive and most treatments have to be repeated annually or more often.”

When I noted that all the affected lakes seem to be heavily developed, Gorney confirmed that there is a direct causal relationship. “They’re often seen together but it’s not the only predictive factor,” she said. “Stormwater runoff, bank erosion, certain agricultural practices — both fertilizers and animal manure, can lead to more nutrients in a lake.” 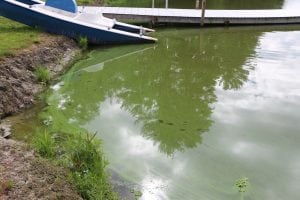 A bloom seen in a Putnam County lake. (Photo provided. )

The excess nutrients can come from anywhere, not just from residences and businesses located near lakes. “All land drains to some body of water,” Gorney said. “People should be aware of what’s coming off their land. Use the least possible amount of fertilizer with the least amount of phosphorus.”

Rainwater coming off a roof, a driveway, a sidewalk, a road or a parking lot contains chemicals that dump into our waterways. Green roofs that hold rain, porous paving and rain gardens, which collect stormwater and keep it on a property, are effective in storing and cleansing water. While the DEC can work with communities and lake associations to find strategies and plans to mitigate harmful algal blooms, anyone can create a rain garden in their lawn.

A rain garden can be built over a weekend. In simple terms, it’s a 4- to 6-inch depressed area designed to hold an inch or more of water during a typical rain. Test the soil first to make sure the water will drain into the ground within 24 hours. You’re not making a wetland. It’s filled with plants that like wet feet.

Detailed instructions can be found on Cooperative Extension websites. Sometimes there are local classes, too. Perennials that will thrive in wetter soils include iris, milkweeds, Joe-pye weed, coneflowers and blueberries.