Break-ins may be related to $1,300 theft in Beacon

Cash was stolen from a local church and food pantry donation jar in the latest round of burglaries in Cold Spring. A total of five burglaries or attempted break-ins took place between late Sunday, July 17, and early Tuesday, July 19.

Capt. William McNamara of the Putnam County Sheriff’s Department told The Current that it was investigating with assistance from the Cold Spring Police Department. No arrests have been made, but a “person of interest” is being sought, he said. “Investigators are reviewing [closed circuit] TV recordings and interviewing potential witnesses.”

The latest burglaries brings to nine the number of incidents under investigation. During the first week of June, break-ins also occurred at Moo Moo’s Creamery on the Cold Spring waterfront and GoGo Pops, Brassiere Le Bouchon and Kismet at Caryn’s on Main Street.

Father Tom Kiley, pastor of Our Lady of Loretto, told The Current that he had locked all the church doors on the night of July 17 but that on Monday morning he discovered one open. He said there was no sign of forced entry. A cash box used to collect money from the sale of CDs was taken. Kiley said he didn’t know how much money was inside. 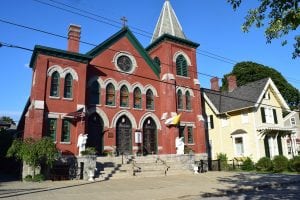 An undetermined amount of cash was stolen from Our Lady of Loretto. (Photo by M. Turton)

The Country Touch at 97 Main St. was burglarized the same night. Connie Kelley, the gift shop’s owner, said she received a call on Monday morning from a tenant who lives above the store informing her that the store’s back door was open and its window broken. Kelley said the cash register had been left open overnight and contained no money. (Many store owners do this so thieves don’t damage the register by forcing it open.) However, Kelley said the intruder was able to find a well-hidden can used to collect money for the Philipstown Food Pantry and stole $4 or $5.

About $70 in cash was also taken from a bag Kelley said was also well-hidden. Four rolls of pennies were not taken. Whoever was behind the robbery was “very neat,” Kelley observed. “They put the lid back on the food pantry jar, zipped up the money bag and put it back where it belonged.” Kelley had a new deadbolt installed the same day. She said the shop had previously been robbed seven or eight years ago.

About 10 miles north, Tito Santana Taqueria, located at 142 Main St. in Beacon, was broken into late Monday night or early Tuesday morning. About $1,300 in cash was taken, said Beacon Police Chief Doug Solomon. It was the only robbery reported during that period.

“We believe the burglaries in Dutchess and Putnam Counties are related, and we’re pursuing active leads along with the other agencies,” Solomon said. The restaurant’s owner, Kamel Jamal, also owns Ziatün and Beacon Bread Company in Beacon and Angelina’s in Cold Spring.

A break-in at Bijou Galleries at 50 Main St. was thwarted by its alarm system. At around 3 a.m. Monday someone gained entry through a window, despite it being reinforced by steel bars. The intrusion set off an alarm that loudly blared, “Burglar! … Burglar! … Burglar!” 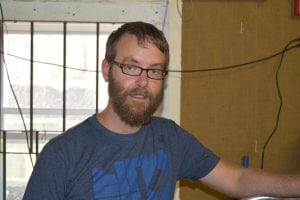 Ethan Timm: Alarm was worth the investment. (Photo by M. Turton)

Ethan Timm, whose family owns the business and building, lives in an upstairs apartment. “I heard the alarm and then heard someone leaving,” he said. The alarm was worth the investment, he said. “As far as we can tell nothing was taken.” Timm said it was the first burglary attempt at the business, which has operated at that location for more than 20 years.

The thief or thieves also came up empty handed at Hudson Hil’s Café & Market at 129 Main St. Co-owner Hilary Hayes said the restaurant was broken into through the kitchen door in the rear. The door was not damaged and nothing was stolen, including alcohol that was readily accessible, she said.

“We never leave cash on the premises overnight,” Hayes said, adding that investigators from the sheriff’s department took fingerprints and lead dogs around the premises on Tuesday morning. It was the first time the business had been broken into. 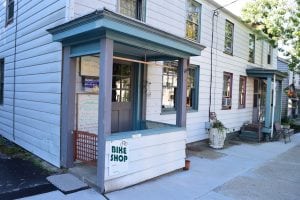 Yet another failed robbery took place a few doors down. Pierre Vittori, who operates a small bike shop at 141 Main St., said someone tried to force open its back door but could not.

Although a rumor circulated in Cold Spring that Moo Moo’s Creamery on the waterfront had been robbed of $5,000, owner Alexi Katsetos said no break-in occurred there.

One thought on “Loretto, Businesses Latest Victims of Burglaries”