The Butterfield Library in Cold Spring will screen the 1959 heist thriller Odds Against Tomorrow, directed by Robert Wise and starring Harry Belafonte, at 7 p.m. on Saturday, July 30. 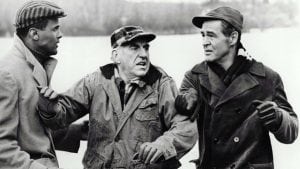 Harry Belafonte, Ed Begley and Robert Ryan in a scene from Odds Against Tomorrow.

Wise’s film is considered the first noir with a black protagonist (it was promoted with the tagline, “Money brought them together. Racism tore them apart”), and it marked the last time the director shot in black and white, which gave his noir films what has been called “a gritty realism.” (His later films include West Side Story and The Sound of Music.)