Two men were taken to a hospital on Tuesday, July 26, by helicopter after a beverage delivery van left the road and overturned along Route 9D in Garrison.

The driver was traveling north at about 1:20 p.m. with a passenger when the van crossed into the southbound lane, ran off the road, struck a tree and overturned. The crash occurred about a mile south of Route 403, near the property of the Capuchin Youth & Family Ministries. 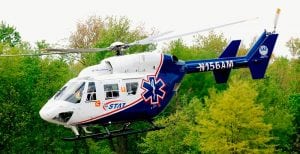 The first responders, from the Putnam County Sheriff’s Department, the Garrison Ambulance Corps and the Philipstown Ambulance Corps, called for helicopters from LifeNet Air 2 in Wallkill and the New Jersey-based Hackensack Helicopter Service to transport the victims to Westchester Medical Center in Valhalla. Their injuries are not believed to be life-threatening.

Route 9D was closed in both directions for about three hours. No tickets were issued. The crash remains under investigation.

One thought on “Two Airlifted After Garrison Crash”