Yes, it’s hot enough for us

Martha and the Vandellas took Heat Wave to number four on the Billboard charts in July 1963, but the song’s torrid lyrics had nothing to do with weather. Three years later, the Lovin’ Spoonful enjoyed their moment in the sun with Summer in the City, a song by John Sebastian (who, as it happens, plays the Towne Crier in Beacon on Aug. 27) whose lyrics still capture the feel of the real heat wave endured by Hudson Valley residents this past week: “All around, people looking half dead, walking on the sidewalk, hotter than a match head.”

The thermometer has been especially cruel of late. Temperatures around Philipstown and Beacon surpassed 90 degrees each day from July 21 through 28. High humidity added to the discomfort. Thankfully, the forecast calls for some relief July 29 to 31, with temperatures in the upper 70s, followed by a week in the mid-80s.

Jerry Thaler, a resident of Yorktown Heights, knows about heat waves. Using a data collection station at his home, he has monitored conditions for more than 50 years as a volunteer for the National Weather Service. The retired optometrist also has written five books, including Hudson Valley Warming and A Weather History and Climate Guide to the Lower Hudson Valley.

Asked if he thought the summer of 2016 is indicative of long-term climate change, Thaler said, “Absolutely it’s climate change. This is the warmest climate since records have been kept since 1890 or earlier.” Thaler said to qualify as a “heat wave,” temperatures must exceed 90 degrees for three or more days. By July 28 the Hudson Valley had been under the broiler for eight straight days.

Weather Underground meteorologist Kari Strenfel noted in an email that 2015 was the hottest year ever recorded. And it was not an aberration.  According to data collected by the National Oceanic and Atmospheric Administration and NASA, 15 of the 16 hottest years since 1880 have occurred since 1999, and this year is on track to be another record breaker, Strenfel said.

Weather Underground, which provides the five-day forecast posted at highlandscurrent.com, collects data from a network of more than 200,000 private weather stations (PWS) around the world, including in Putnam and Dutchess counties.

Bob Polastre has operated a PWS at his home in North Highlands for 10 years. A Christmas present from his wife, Janis, it may have been that rare perfect gift.  “I love data,” said Polastre, a retired IBM advisory engineer who noted that his former employer owns Weather Underground. His weather station, which cost $600, is solar-powered with a battery backup. 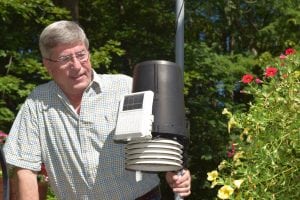 “It posts data to the web every 30 seconds, including temperature, humidity, wind speed and direction and precipitation,” he explained. The “hot spot” each day usually happens occurs around 2:30 to 3:00 p.m. You can monitor Polastre’s station at wunderground.com. A list of local weather station locations and data are also available for Cold Spring and Beacon.

One seldom thought of consequence of a heat wave is its effect on Cold Spring’s water supply. Superintendent of Water and Sewer Greg Phillips estimates that on a normal summer day more than 134,000 gallons of water are lost to evaporation at the upper and lower reservoirs on Lake Surprise Road. During extremely high temperatures, especially days with low humidity, even more water is lost.

When the weather turns hot, people’s buying habits change. At Foodtown in Cold Spring, arguably the most air-conditioned indoor space around, Chuck Hustis didn’t have to think for long when asked what the bestsellers have been over the past week.

“Definitely water,” he said. “A lot of water. That and ice, beer, ice cream and chopped beef, believe it or not, for grilling. Yogurt, as well. We put a full case out and three hours later, it’s gone.” 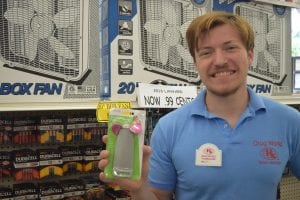 Billy Cribley shows off a hot-weather bestseller at Drug World of Cold Spring – a personal fan. (Photo by M. Turton)

Sara O’Brien, assistant manager at Drug World of Cold Spring, said Gatorade goes quickly there. (Hikers are among their best customers.) “And small, personal fans,” she added, “the portable ones that you can carry around,” although box, tower and box fans sell well, too, as do floating pool toys.

Is there a better purchase during a heat wave than a double-dip ice cream cone? Sales are booming at Cold Spring’s ice cream and frozen yogurt venues, including the newly opened Ice Cream Shack at 349 Main St. in Nelsonville. “Some days it’s been almost too hot for ice cream,” conceded owner Tommy Allen, noting that afternoons can be slow during extreme temperatures but that traffic picks up after 7:30 p.m. 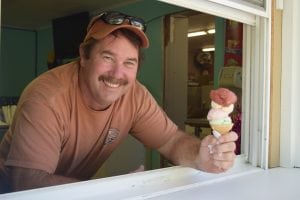 Tommy Allen at the Ice Cream Shack in Nelsonville has what you need on a hot day. (Photo by M. Turton)

Allen says hard ice cream is more popular than soft, “mainly because we offer 28 flavors” in the hard variety (the favorite flavor always seems to be “whatever one we don’t have or are almost out of,” he said with a smile), while fans of soft ice cream are limited to chocolate, vanilla or a twist.

The American Red Cross offers these tips for people and pets during extremely hot weather: