The Cold Spring Village Board continues to grapple with a number of larger-than-expected expenses — all within a budget that increased spending by less than $2,000 because of a state-imposed cap of 0.73 percent.

And the state announced two weeks ago that the cap, which is tied to inflation, will be even lower next year, at 0.68 percent. It can be overridden only with a public vote, something that 25 percent of local governments in New York have done this year.

The unexpected expenses prompted Mayor Dave Merandy to express frustration at the board’s July 26 meeting. “I don’t know where we’re going to get the money,” he said.

As an example of the challenges facing the board, tree maintenance recommended by the Tree Advisory Board has already exceeded the 2016-17 budget after the board approved a $1,600 bid from Lee’s Tree Service of Cold Spring to trim a tree deemed hazardous at the corner of Garden Street and Northern Avenue.

In addition, the cost of liability insurance will increase by more than $3,000 annually on  Aug. 1, mainly due to coverage required for the wastewater treatment building constructed in the previous budget year. An audit by the Spain Agency also identified a number of pieces of equipment in the village highway garage that had not been insured.

Deputy Mayor Marie Early reported that area lighting to be installed as part of the Main Street Project could also cost more than anticipated. While the fixtures are not expensive (about $25 each), the eight new lights being proposed would increase the village’s electrical bill by more than $1,000 a year. For now, she said, one light will be added near the corner of Main and Rock streets to assess the quality and impact and the village might choose not to install all eight. 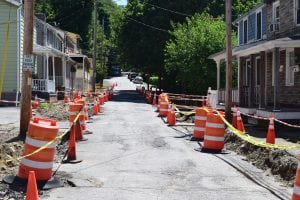 Improvements to Furnace Street are underway. (Photo by M. Turton)

Meanwhile, the reconstruction of Furnace Street is the only major work remaining on the Main Street Project. Crews from Con-Tech Construction have completed drainage improvements and during the first two weeks of August will install new sidewalks, followed by two weeks to repave the street.

The board discussed a preliminary report from Trustee Lynn Miller suggesting policies regarding video productions shot in the village. Miller said she looked at practices in more than 20 municipalities. Fees paid to the village are a major consideration and she suggested a sliding scale based on the scope of production topping out at $1,500 for the first day of shooting and $1,000 for each additional day. Other provisions would include a  timetable for submission and approval of applications, a detailed production description, insurance considerations, security and notification to property owners. Based on the board’s discussion, it appears likely it will appoint a committee to consider applications. Miller will present a revised report at a future meeting.

2 thoughts on “Village Struggles With Costs”