Tickets for the free Hudson Valley Shakespeare Festival production of Our Town, starring company members and area residents who auditioned for roles, will be available starting at noon on Monday, Aug. 1, for four performances over Labor Day weekend.

Thornton Wilder’s 1938 Pulitzer Prize-winning drama about life in the small village of Grover’s Corners will be performed under the HVSF tent at Boscobel on Sept. 2 and 4, at the Newburgh Brewing Company in Newburgh on Sept. 5 and at the Paramount Hudson Valley in Peekskill on Sept. 3.

To request tickets, visit hvshakespeare.org on Aug. 1, or call 845-265-9575 for the Boscobel and Newburgh performances. For the Peekskill performance, call 914-739-0039. The limit is four tickets per family. HVSF also plans to have four pop-up box offices on Aug. 27 to distribute tickets on a first-come, first-serve basis. There will also be a wait list at the box office on the night of the performances. 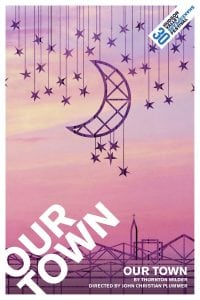 The show is being directed by John Christian Plummer of Cold Spring. The HVSF company members in the cast are Sean McNall as Stage Manager, Antoinette Robinson as Emily Webb and Ryan Quinn as Sam Craig.

One thought on “How to Score “Our Town” Tickets”