The conversation ended at the shore

Unusual for his breed, Rufus was a Jack Russell who spoke to the water — and it spoke back.

His lifelong conversation began when he was barely six months old in the pool at our house on Main Street in the innocent early summer of 2001. He would stand confidently on the submerged step at the shallow end, slap the surface with a paw, and when the water responded with a splash — as it always did — he would counter with a bark.

This dialogue might have lasted hours were it not for the fact that he also loved to swim. And not just a dip to cool off either: he was in training. If we swam laps, a cross-species gauntlet was being thrown and he would invariably do his best to win. Were we to dive, he mimicked enthusiastically. A confident canine athlete, he would balletically leapfrog from pool’s edge to whatever floating furniture drifted by, then plunging into the drink. 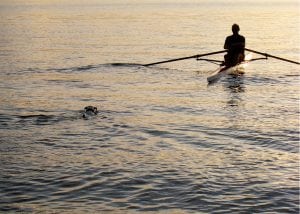 Nor did this activity require human participation: Late one night this same summer we were lazing around the house and realized things were a little too quiet. It was a hot night and by now having taken over our lives and the domestic situation, Rufus had fabricated a jury-rigged doggy-door, ripping away a corner of the screen. Fearing an escape, we headed out in search only to detect faint sounds of splashing in the distant darkness by the pool. There was Our Boy, determinedly doing laps — all by himself — with just the slightest hint of a smile on his face.

Dogs love and live unconditionally and Rufus’s aquaphilia was no exception: walking by the banks of Hudson in Chelsea we turned our backs just long enough to spot him 100 or so feet from the bank headed across the river. A passerby on a jet ski retrieved him before the current had a chance to whisk him away.

Jessie (my wife) and her brother share a 135-year-old summer cottage on Lake Sunapee in New London, New Hampshire, and ever since he was a pup, Rufus’s exchanges with that particular body of water were both wide and deep.

Whenever we made the journey north, his excitement was palpable as he squealed and scratched at the car window for the last 10 miles of the trip that circumnavigate the lake before reaching the camp. On arrival, he just couldn’t wait, leaping from the car window before the doors were opened in a dash for the beach. He was mad for it. 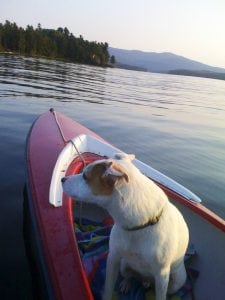 He basked in the sun, faithfully chased ducks from the beach and swam in the cool, clear water. There were adventures, too: Jess once took off across the lake in a canoe headed to Loon Island, a mile-and-some-change away. Halfway there, she turned around to find Rufus following determinedly. He knew his way around and was fearless.

Winter this year was tough on him. Living with Jess in the city, the four flights up-and-down the stairs were getting harder. He was marginally deaf, had a cataract in one eye and was getting a little sloppy in his personal habits. He slept during the day, ate very little and paced the floor restlessly at night.

In early July the opportunity for a trip to the lake presented itself and we jumped thinking it might help. Once there, although his weakness was still obvious and his talks with the water spirits were confined to quiet conferences from the bank, he surprised us one afternoon appearing with a ball in his maw, demanding a round of fetch (another formerly obsessive activity) which he proceeded to vigorously pursue to our bemusal and joy. At sunset, he even braved a dip. The Comeback Kid slept like a baby that night. 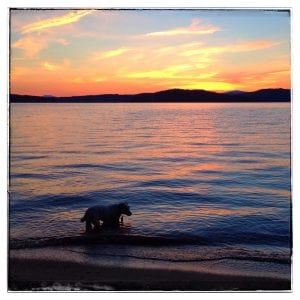 Rufus at sunset on July 14 at Lake Sunapee in New Hampshire (Photo by J. Dizney)

The next day, friends up the shoreline invited us over for a late afternoon picnic. Humans and canines all got along famously. More rounds of fetch were played and the talk was curiously of other pets come and gone.

Someone noted his absence.

At first we weren’t too worried — Rufus had wandered off there before, chasing chipmunks into the woods or under the camp. Calling for a near-deaf dog was a losing proposition so six adults went off in search of one small white dog. We each independently checked the shore and then the woods.

Jessie, remembering him standing in a shaft of light by the dock, intuitively gave the waterside another try.

The conversation had ended, just feet from where we were sitting, in his time and on his terms. Its resolution, like most of life, will remain a mystery to those of us without the skills of that language.

Rufus was a good dog — a good friend — and we will miss him.

HOW WE REPORT
The Current is a member of The Trust Project, a consortium of news outlets that has adopted standards to allow readers to more easily assess the credibility of their journalism. Our best practices, including our verification and correction policies, can be accessed here. Have a comment? A news tip? Spot an error? Email [email protected]rg.

6 thoughts on “The Waterdog”