Crossing oceans, changing planes, and skipping over continents, Lucas Millard and Kate Stryker have logged thousands of miles in their quest to document a short stretch of road. Located deep in the Himalayas, the road is the focal point of a documentary, now three-quarters complete, that they’ve been working on for the past two years.

The Beacon filmmaking couple will be sharing stories and showing clips from the forthcoming film, called Baato (Nepalese for path, trail or road) at the Beahive at 8 p.m. on Friday, Aug. 5. They hope to raise awareness for the project, meet more of their Beacon neighbors and solicit the funds needed to finish the film. 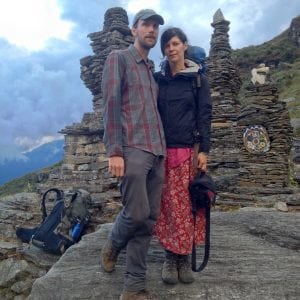 Baato was filmed over the course of nine months; the schedule was longer, but the 2015 earthquake in Nepal curtailed their stay. The film presents five overlapping stories focused on people who live along the route of a highway under construction that links China, Nepal and India. Once complete, transport times between Beijing and the major shipping ports of Kolkata and Dhaka will decrease significantly. At the same time, a large hydropower project is due to begin construction along the route.

Millard first visited Nepal in the mid-1990s as part of an immersive program, Village Study Tour, run by the University of Wisconsin. He was sent to a village in eastern Nepal, where he lived and did research on the area’s “porters,” or farmers who transport goods. In 2013 he made a return trip with Stryker to co-teach a stop-motion animation workshop at the Sattya Media Arts Collective in Kathmandu and visited the hills of eastern Nepal where Millard had done his research in 1996-97. They discovered that many things had changed in the decades since, in part due to a rapid expansion of the road network. 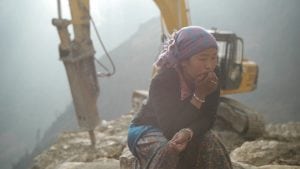 A scene from Baato (photo by Lucas Millard, courtesy of Bottomless Well Films)

In 2014 Millard was awarded a Fulbright grant to visit Nepal for 10 months, and he and Stryker began production on Baato. First, the couple walked the length of the road, planning the film. As they walked, they discovered that two weeks earlier, a road crew had begun excavating near the Chinese border. They immediately focused on that area and began filming earlier than anticipated. “We felt we had to,” Millard says.

Knowing they wanted to tell the story through personal narratives, they searched for Nepalis who live along the route of the planned transnational highway. They say their subjects had no objection to being filmed. “Everyone we talked to, asking if we could tag along and film them, agreed — they were all open to it,” says Millard.  The intersecting storylines (sometimes people in one show up in another) involve a mule team driver, a teenage villager, a mother on seasonal migration with her young family, a road construction worker and a staff member on a bus. 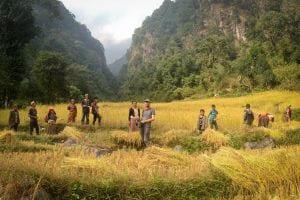 Lucas Millard, center, during the filming of the rice harvest in Gola, Nepal (image courtesy of Bottomless Well Films)

The dynamic is complex, Stryker explains. “People are largely in favor of the road, even though some of their land was taken for it, with no compensation given to them and they aren’t part of the process in terms of determining what will happen. But they think the road will increase their access to education, heathcare and goods.”

The residents’ major concerns, she says, are that the road will create more dependence on fossil fuels, affect the area’s biodiversity and remove some aspects of the economy from local control, such as harvesting medicinal herbs.

“People think the road will bring new opportunities, conveniences, but to us it seemed like nobody was paying attention to what the road was taking away,” Millard says. “As there have been no other roads there, people haven’t been able to see what changes they bring.” He quickly adds: “These are our opinions, not the film’s — in the film we’re trying to show the audience what the issues are and how the region is transforming.”

In fact, the filmmakers experienced a real-life drama that touched on both sides of the issue when one of their local crew members fell ill and the difficulties in transporting him to a medical facility spoke to a benefit of road-building. 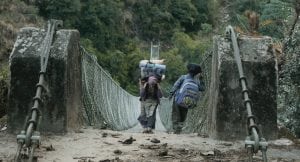 A scene from Baato (photo by Kate Stryker, courtesy of Bottomless Well Films)

Seven months in, Millard and Stryker had filmed four of their five planned stories when a devastating 7.8 magnitude earthquake struck Nepal. After regrouping, they quickly filmed the last story and headed back to Beacon, where they moved three years ago from the city after being introduced to the area on day hikes. They’ve spent the 14 months since their return working on post-production and their day jobs. (Millard, who has an MFA in film production from the University of Texas at Austin, is a freelance cinematographer and gaffer and Stryker, who has a master’s in science education from NYU, is a media instructor.)

In addition to the Fulbright grant and financial support  from Documentary Education Resources, the directors have launched a fundraising campaign through Seed&Spark. They hope to hire an editor for the film, who “can look at it with fresh eyes,” said Millard. “Collaboration is needed to elevate the story.”

Plans are to submit Baato to film festivals, then screen it for targeted audiences, sometimes accompanied by invited specialists in issues such as globalization, infrastructure development, natural resources, anthropology, the environment and South Asian studies. Like most documentary filmmakers, their goals include a theatrical premiere, DVD release and broadcast on a network such as PBS or HBO.

Millard and Stryker also aspire to show the film in the areas where they filmed and in others that face similar issues. Because many of the communities lack electricity and would need a source of power to project the film, they refer to the plan as a “solar cinema” tour.

The Aug. 5 event at the Beahive, 291 Main St., will include food and drinks provided by Beacon Pantry, More Good and 2 Way Brewing Company. For more information about the film, visits roadtonepal.com or facebook.com/Baatodocfilm.