Whether commissioned to design a poster as a commercial job, or when creating them on behalf of the nonprofits he has supported through donations of his art, renowned Garrison painter Don Nice has given each his careful consideration. It’s a consideration of the color and angles, that cause the eye to be pulled a certain way and other things that the casual viewer might not pick up on. Perhaps some surmising may come more easily after viewing a roomful of Nice’s poster designs at the Don Nice ICON: 40 Years of Posters exhibit which opens — with a reception for the artist from 5 to 7 pm. — at the Riverside Galleries at Garrison Art Center on Aug. 13 and runs through Sept. 11. The show, curated by Nice’s manager and daughter, Leslie Nice-Heanue, will include many of his originals, done on a large silk screen, along with signed and unsigned prints.

In Nice’s studio, located upstairs at his home overlooking the Hudson, a quick glance at the poster-filled walls provides an instant view of the scope of his clients and affiliations. The commissioned work, done for auspicious clients such as the Mostly Mozart Festival at Lincoln Center and the Lake Placid Olympics Committee, and their international equivalents, is interspersed with many others heralding local and regional institutions, including many environmental protection advocacy groups in the area. 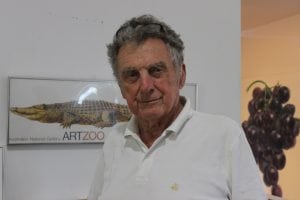 Don Nice, in his Garrison studio  (Photo by A. Rooney)

Garrison Art Center, in its exhibition notes, calls Nice “a classic figure in American art of the past half century. He burst upon the scene in the early 1960s when the Whitney Museum of American Art acquired his “American Series #5.” He was recognized part of the innovative group of “new perceptual realists” who wanted to put content back into painting. Nice integrates a gestured technique gleaned from earlier expressionist and Abstract Expressionist painters with a realist focus and energy derived from Pop Art. Combining a naturalist’s interest in observation with an artist’s compulsion for artistic vision, Nice embraces aspects of popular culture and certain critical issues of our time. He paints classic American products like sneakers, candy wrappers and soda bottles with the same intensity he lavishes on quintessential site-specific landscapes from the Hudson River Valley to the Sierra Nevada Mountains. In doing so, he has created a distinctive vision of civilization’s detritus in league with cultural concerns for the environment.

Nice says “Posters bring the awareness of the public to my art.” The original silkscreened work was done on a hand-cut screen and is very detailed, with each color done separately. The work requires a great deal of concentration. “You can’t make mistakes,” he says simply. As for the determination of color, “To be frank, it’s just in me. I let the piece tell me what to do. Within that framework there are considerations of composition.” Choosing a horizontal image on a poster as an example, Nice points out “the boot, put on the right end to stop the eye; the strap on the binoculars to carry us forward. Angles, repetitions.” 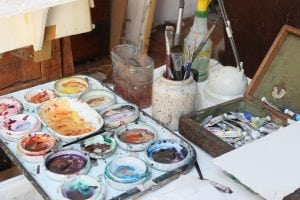 The tools of his trade: Don Nice’s paints and brushes.  (Photo by A. Rooney)

Nice grew up in Woodlake, California, a place he calls “an absolute paradise, at the base of Sequoia National Park, 20 feet above sea level: cattle on the hillsides, trees. I grew up in the country.” Noting that his wife, Sandra, grew up in White Bear Lake, Minnesota, Nice says both settings were places where “kids could get out into mischief.” Their move to Garrison came after a period living in Brooklyn, without a lot of money. “At those times — the late 60s — nobody sold any art. I had this truck and could hardly wait until spring to take my son Brian out. We looked at Connecticut, New Jersey, but then friends of ours in Garrison were redoing a barn, so we visited. We pulled into this driveway and knew this was it; we’ve been restoring it ever since. In 1820 this was a school for boys, four stories high. Around 54 boys lived here, with bedrooms all over the place!”

In between his growing up years and his adult life, Nice, his artistic talents already evident, attended the University of Southern California on a football scholarship, earning a teaching certificate and attending art classes at night. According to the Garrison Art Center’s notes, “At the end of the Korean War, Nice studied painting in Rome under the GI Bill. While living in Florence he met many artists and went to Salzburg for the opportunity to study with Oskar Kokoschka, whom he calls his biggest influence. Nice recalls that, “Kokoschka taught me ‘how to see’ and to ‘forget about making paintings and concentrate on painting.’ ’’ 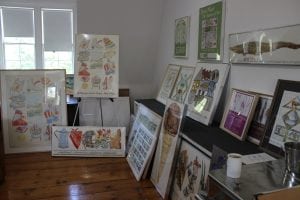 An array of Don Nice’s posters, in a corner of his studio.  (Photo by A. Rooney)

From Italy, Nice went to Paris and saw a major exhibition called The New American Paintings. Excited by the work of Willem de Kooning and Jackson Pollock and the possibilities of Abstract Expressionism, he returned to America. “I felt an energy and felt I had to come back,” Nice says, continuing “I wound up destroying a lot of previous work. I decided to reintroduce subject matter into my paintings — but really, I didn’t know how to paint things. I started by doing a drawing, putting on grid on it, then transferring it to canvas. The first painting I did — it’s now at the Walker Art Center — was of a bunch of grapes. I like to challenge the idea of a still life by lining things up rather than making them into an arrangement.” In 1962 Nice was accepted to the graduate school of painting at Yale University. Fellow students included Chuck Close, Richard Serra and others. After receiving his MFA from Yale in 1964, Nice taught at the School of Visual Arts for many years.

Despite periods of ill health in recent years, Nice continues to paint regularly, and the interest in his work keeps growing. Recent exhibitions include shows at the Driscoll Babcock Gallery and at Pace Prints, both in Manhattan. For the past year or so, Nice’s daughter has taken on the job of managing the business end of her father’s art, working with galleries around the world, as well as extensively archiving the collection and updating his website. These activities prompted this show, in a way, as she relates, “I was digging around all his works when I was organizing and I came upon these posters here and there and thought they told a real story of the work he has done through the years. As we had been talking to Carinda [Swann, executive director of the Garrison Art Center] about an exhibit, I said, “How about a poster show?”

The Art Center was immediately on board, its exhibition notes explaining why: “… this selection of posters feature iconographic imagery from American culture. The exhibition shows viewers that the originals of a Nice poster are actually fine art paintings with a written message, mostly in the hand of the artist.”

Even with the travails of illness, the past year has been gratifying to Nice in unexpected ways, he explains: “The wonderful thing that happened because I was quite ill is that I, like a lot of others, worried about ‘What will happen to the art?’ as I hadn’t paid attention to that side of things. I was never good about promoting my work either. Nowadays you really need someone to do this, and Leslie is that someone.”

The Riverside Galleries at Garrison Art Center, 23 Garrison’s Landing, are open Tuesday through Sunday from 10 a.m. to 5 p.m. For more information visit donnice.com and garrisonartcenter.org or call 845-424-3960.