The evolution of libraries over just the past couple of decades has been pretty radical. Those hushed institutions have reinvented themselves, propelled by the digital era and a population dependent on a wide spectrum of services. Taking this even further, Garrison’s Desmond-Fish Library is initiating a series of Community Conversations, a “talking across the kitchen sink” of kinds for community members, library patrons or not, to exchange aspirations, ideas and concerns for the community as a whole, and work together to make the community even better. In other words, it’s not just about the library.

The first of a planned five conversations extending through October will be held on Thursday, Aug. 11 at 7 p.m. at Desmond-Fish Library. The days of the week and times of the meetings are intentionally varied; see the end of this article for full details. These gathering of the community meetings, all informal and open to the public (i.e. not just Garrison residents) will continue over a series of months, at a variety of locations. They are part of a planning initiative by the Library’s Board of Trustees.

The idea for all of this began with Red Hook’s Libraries Transforming Communities (LTC) team, which set out to engage local residents there. They learned that, as in most places, people were frustrated that problems in their community—even obvious ones—often went unaddressed. In describing their process, an article on the American Libraries Association’s website gave an example of the process, which began with a consensus on a small, but important issue for that town: 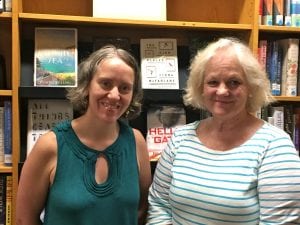 “When the discussion around community aspirations began in 2014, most residents reported how much they loved living in this community. A couple of issues quickly rose to the top that needed to be addressed, including one iconic one: the town’s only stoplight … [This] was emblematic of their concerns and came up in many discussions with residents. The LTC team took action and brought officials together to figure out how to fix the problem. This seemingly small act sent a signal to the community that it was possible to make things happen, which has led to people stepping forward to work together on other issues that are keeping Red Hook from being more livable and connected.

The library is playing a central role in convening these groups and has become a model for how other organizations want to work in the community … Choosing to act on this was a critical decision; it sent a signal that change was possible and that people’s concerns mattered … The LTC team’s efforts have inspired residents to get involved in ways they weren’t before. The library is playing a convening role, but in many cases, residents are developing solutions to problems.”

Library trustee Anita Prentice explains that as a public library, Desmond-Fish is effectively mandated to talk to the community. “Our aim is to ask ‘How can we help you achieve your goals? then using simple tools, like asking questions like ‘What are your aspirations for the community? What changes could happen to help you achieve these ideals?” to help them achieve them. Prentice and Desmond-Fish Library Director Jen McCreery noted that Mid-Hudson’s coordinator for library sustainability Rebekkah Smith Aldrich, had been extremely helpful to them, meeting with the board and guiding a series of preliminary workshops in the spring, which took board members through this very process.

What the board members took from their own sessions was a consensus that people “want to live in a community that feels more connected; having more places for people to gather.” Sustainability, protecting the environment and providing more outdoor education — getting kids in particular away from screens — were also important to them. Another area of concern was finding a better way to welcome people into the community, particularly those without children, who can find it isolating here. Some suggestions for improving in that area included meet-ups and specially targeted events, brochures given to realtors, and information packets, all less family-focused, to be more inclusive.

McCreery says the board found the process “inspiring — they wanted to take it to the community.” A pair of two different board members each time will moderate the public sessions, which McCreery said emphatically, should not be considered formal forums. “It’s a natural fit for us to support this. The tools we’ll provide are so people can achieve their goals. For us this will help re-focus on our purpose. We have been very involved with our physical building and our collection, and now we can look beyond that and it will be good to have the feedback on that larger purpose. In a release from the library about this series, she stated, “The Library is a reflection of the community we serve. Hearing directly from our friends and neighbors in Philipstown will help us to focus our efforts and resources in support of our community’s larger goals.”

According to David Lilburne, a Library trustee involved in planning the workshops: “These conversations are a chance for us to better understand people’s aspirations for our community, the concerns they have, and what they believe might make a difference in strengthening the community.”

To reach diverse sectors of the community, publicizing the Community Conversations, the Library has sent out eBlasts, started a Facebook page devoted to the series, handed out information at the farmers’ market. In addition to attending the Community Conversations, Prentice urged all interested community members to attend Desmond-Fish Library’s board meetings, which take place three times a year. “They’re open to the public and it’s not an elite group.” Anyone interested should contact the library for more information.

Schedule and locations for the Community Conversations:

If possible, please let the Library Director know if you plan attend; call McCreery at 845-424-3020.

For those unable to attend a scheduled Community Conversation, a short survey is available on the Desmond-Fish Library website at desmondfishlibrary.org. This survey is also available in paper form at the Library and will be distributed at the Friends of the Library Book Sale beginning Aug. 13 at the Library.