Project to run through 2018

Part of the long and arduous road that will eventually lead to an overhaul of the Village of Cold Spring Code was traveled by about 15 residents who attended a public meeting on Aug. 3 during which members of the committee charged with updating the badly outdated document presented their first set of recommended changes.

Each of the five volunteer members of the Code Update Committee (CUC) — Carolyn Bachan, Ethan Timm, Norah Hart, Paul Henderson and Donald MacDonald — presented portions of the group’s recommendations at the nearly two-hour meeting held at the Cold Spring firehouse on Main Street.

The complete update will address five subject area: uses; appearances; environment; procedures and consistency/clarity. Recommendations in each of those areas will be presented at public meetings as part of a marathon effort that is projected to be finished by 2019. Ultimately the village board will have to approve any revisions proposed by the committee. 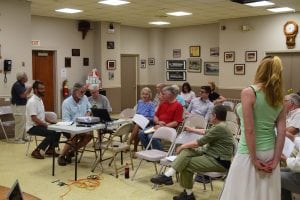 A sampling of numerous recommendations highlighted at the meeting included:

Much of the impetus for the code update came from recommendations contained in the 2011 Local Waterfront Revitalization Strategy and the Comprehensive Plan adopted by the village in 2012. In 2013 Cold Spring received a $75,000 grant from the New York State Energy Research and Development Authority (NYSERDA) to help fund the update. Greenplan, a Rhinebeck-based consulting firm specializing in municipal planning was then hired to assist the CUC.

Written comments regarding the CUC’s recommendations can be submitted through August 31, 2016 via email to Trustee Marie Early at [email protected] or by mailing comments to Village Hall, 85 Main St., Cold Spring, NY 10516 Attention: Code Update Committee.