In 1958, a newspaper ad was placed seeking people interested in forming a community theater. Nearly 60 years later the theater is on solid ground, but County Players is always looking for new actors, designers, technical types, marketing whizzes and anyone else interested in theater, especially young people, to help put on shows four times a year at its renovated space in Wappingers Falls.

The group’s first show in 1958 was Bell, Book and Candle; the first season featured Laura, The Glass Menagerie and Born Yesterday and pulled in 100 subscribers. More than 200 shows later, the non-profit has enjoyed frequently sold-out houses but also endured a fire next door and a roof that nearly collapsed.

“We’re focusing now on trying to get younger people involved and to attract a younger audience,” says Bill Peckham, who has been designing and constructing sets, directing and occasionally acting for the company for decades. Peckham says the theater, which has about 400 seats, is the perfect size. “We sell out but rarely extend,” he says, “but they’re good houses, usually half-full to full, always for musicals, often for straight plays too. We have a big following and a very loyal subscription base.” 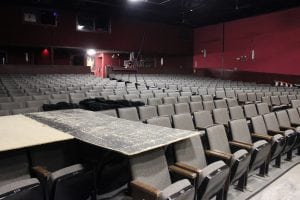 There are just under 400 seats at the Falls Theatre. (Photo by A. Rooney)

Each show is performed eight times over three weekends, typically in September, November, February and May. The season includes a spring musical, a comedy, a drama and one from any category. Audience members come from all over the region, including from across the river and north to Rhinebeck and south to Beacon.

In the beginning, County Players didn’t have a theater of its own; its first shows were staged at the Wappingers Junior High School auditorium. The set would be built on the weekend prior to the Friday night opening and taken down each night so the space could be used for school activities. Throughout the 1960s, County Players continued to expand its audience and developed offshoots such as the High School Drama Awards, in which judges saw 20 or more performances each year and hosted a dinner for the student actors, something that continued until 1989. 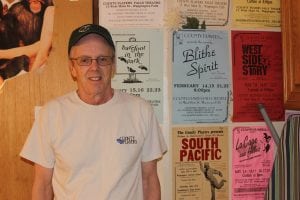 Bill Peckham, who has been involved with County Players for decades, pictured in a dressing room plastered with flyers from previous shows. (Photo by A. Rooney)

Despite a donation of two acres of land for a scene shop, County Players did not have its own theater until the late 1970s, when it purchased the Academy Theater, which had begun as a music hall in the 1920s, then served as everything from a basketball court to a movie theater and finally hosted a flea market before sitting empty for 15 to 20 years.

“When we bought it, it was a bone of contention — a 5-to-4 vote” of   the board, Peckham says. “But since then nobody has argued that it wasn’t the right decision.”

An extension renovation of the newly renamed Falls Theatre, through work parties, began. “It was a dump,” Peckham recalls. “There were no seats, canvas on the walls, nothing,” and it was filthy. Through the efforts of dozens of volunteers, according to a history of the theater written by Peckham with Rachel Cassidy, “a new thrust stage was added, lights hung, 400 seats acquired and bolted into place, a backstage created, the public bathrooms brought to function, and the marquee repaired in time to advertise our first show in our first home. There was no heat, no plumbing backstage. Heat for rehearsals was provided by an industrial kerosene heater. The air was musty, dusty and rank — but our own!”

Over the years, under the supervision of restoration chairman John Sloper, two mini-stages were built, a new electrical system and lights installed, new seats donated by IBM (the employer of many a volunteer) and new curtains, draperies and a fire alarm system installed. The updates, including the creation of a sound booth, have continued through the years. Sloper, who died in 1983, provided generously for County Players in his will, affording it a fiscal security unusual for a community nonprofit. 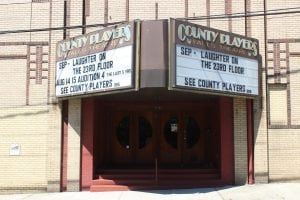 The Falls Theatre used to be a music hall, movie theater and home to a flea market. (Photo by A. Rooney)

“We’ve been pretty much out of the red for 30 years, and our mortgage is paid off, which is very rare and lucky,” says Peckham, a now-retired landscape architect who came to County Players with an interest in set design not unlike the scale models he designed and built for a living.

After overcoming a severe snow storm which imperiled the roof and caused leaks, a truck which crashed into the marquee, a nearby gas explosion and fire, County Players faced another dire situation when the apartment complex next door burned down. (Firefighters battled the flames from the theater’s roof.) The owner didn’t rebuild, and the empty lot was sold to the city, and then to County Players. It hopes for state funding to expand into the space to enhance the lobby, provide handicapped access and increase storage.

The company is overseen by a 12-member board of governors, each of whom have two or three designated jobs while also working with other volunteers. “The vision of this company depends on that,” Peckham adds. It is plugged into the network of other small theaters in the region, exchanging everything from costumes to marketing ideas. 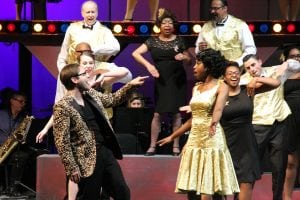 A scene from the musical “Memphis,” which the County Players presented in May. (Photo provided)

There are usually about 10 proposals from directors for musicals or plays before each season. The directors “need to show an interest in the company before we give them a show,” says Peckham. “It’s competitive.” Each show has two production managers responsible for pulling together the creative and technical teams. “Usually we’ve all worked together and know what we can, cannot do,” he says. “We have a lot of regulars, but it’s always a constant struggle to get more volunteers. We’d love them to come to auditions and tell us what they’d like to work on — we’ll find room.”

The upcoming season begins on Sept. 9 with the Neil Simon comedy Laughter on the 23rd Floor and continues with the two-hander musical The Last Five Years before moving on to Amadeus and, finally, Dirty Rotten Scoundrels. Auditions for The Last Five Years are scheduled for 7 p.m. on Sunday, Aug. 14 and Monday, Aug. 15. For details, see countyplayers.org, which also has ticket and subscription information. (The box-office number is 845-298-1491.) The Falls Theatre is located at 2681 W. Main St.