Early detection is key to survival

We import many of our problems when it comes to nature. Exotic species that are introduced, intentionally or mistakenly, tend to have the most potential to devastate native flora and fauna. It’s a global problem that’s been exacerbated by the flow of stuff — products, food, plants, animals — from country to country.

As I type this, I’m sure there’s a garden writer in Asia doing a column about how a pest hitchhiked its way into their country from the U.S. For example, in its native environment the emerald ash borer, native to Asia and Russia, is kept in check by several species of wasps. Some of those wasps have been introduced as biocontrols in the U.S. The wasps parasitize the beetle’s larva, resulting in fewer emerald ash borers and less damage without using pesticides or removing trees. The insects aren’t eradicated, which is difficult, but they are managed. 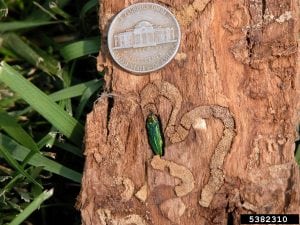 The emerald ash borer leaves trails under the bark of an ash tree as it feeds. Photo: bugwood.org

The emerald ash borer, a serious threat to the ash tree population, was recently found in trees in Oneida County. The state Department of Environmental Conservation, which tracks infestations, issued a quarantine on moving firewood this spring to help stop it from spreading.

The quarantine zone means that it’s illegal to move ash wood in any form as logs, firewood, trees, or even wood chips, beyond that border. Any of those activities could help the emerald ash borer travel without your knowledge. The entire Hudson Valley is in a quarantine border. Follow the containment guidelines and make sure that any time you’re dealing with ash trees or wood, you know where it came from and how it was handled. Anyone with ash trees on their property can aid in monitoring for signs of an infestation and reporting it. If an ash tree looks unhealthy, showing dead areas in the canopy or yellow leaves in the summer, that could be a sign that the emerald ash borer is under the bark damaging it.

The emerald ash borer exits the tree in late summer (around now) and leaves a distinct D-shaped hole where it comes out after feeding under the bark since spring. The tree dies within a few years if untreated. The insect’s feeding cuts off the flow of water and nutrients that it needs to circulate throughout its system. 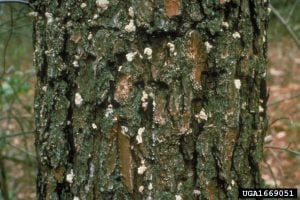 Distinctive sap marks on a pine that look like popcorn are a sign of a Southern pine beetle infestation. (Photo: bugwood.org)

“People have been out looking and so far we haven’t found infested trees,” said Linda Rohleder, the agency’s director of land stewardship. “That’s worrisome. The beetles are here and we need to find them. If you can catch an infestation early, there’s a better chance that we can do something about them.” Even though the beetles haven’t been spotted on this side of the river yet, they can fly.

Research hasn’t determined why the Southern pine beetle has made it so far out of its normal range. It could be that climate change is making the habitat more suitable or that they were carried here by Superstorm Sandy.

Signs of infestation include areas on the pine where the needles turn coppery, meaning they’re dying. Rohleder said to look on the trunk for places that look like popcorn, where pitch is coming out of the tree from the hole the beetle made. Anyone who finds something like that should take a photo and email it to [email protected] for confirmation. 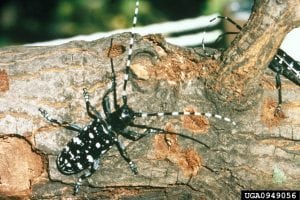 Asian longhorned beetles can be found in pool filters at this time of year. (Photo: bugwood.org)

The DEC is also enlisting public help in monitoring for evidence of the Asian longhorned beetle. The invasive insect has killed hundreds of thousands of trees in the U.S. and is a major threat to maples, which make up much of our native forests in New York. Anyone with a pool is asked to check the filter for the beetle. It comes out at this time of year and the DEC has identified it in areas of Long Island through this effort. More information is available at www.dec.ny.gov about how to submit information.