When Garrison residents smell smoke and call 911, the last thing on their mind is the fire department’s administrative structure. What they need is for the men and women of the Garrison Volunteer Fire Company to come to their aid — and fast. But without a second group of volunteers who pay the bills, there would be no local fire protection.

In December, Garrison residents will go to the polls for the first time to elect five commissioners to oversee the business end of the fledgling Garrison Fire District. 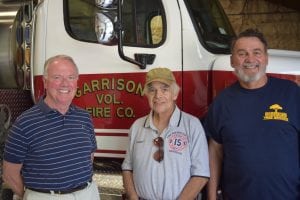 Prentice told The Current that he and his fellow rookie commissioners have been “feeling their way” through the process of getting the district up and running.

“We’ve been busy getting policies in place — basic stuff, “ he said. “We spent six months just trying to sort that out. It’s pretty tedious!” One particular challenge, he said, has been making sure the district complies with all applicable laws. The district has a lawyer on call and each commissioners received training from the New York State Comptroller’s Office, which oversees fire districts.

The 2017 budget was a priority, Prentice said, because the spending plan must be ready for public review by Sept. 27. The district is operating this year on the $610,000 budget inherited from the town.

Unlike New York school districts, residents don’t vote on fire district budgets, but state law does require public hearings, which the Garrison commissioners have scheduled for Oct. 18 at the firehouse on Route 9. “Commissioners can [then] make whatever adjustments they feel are required,” Prentice explained. The public does vote on major purchases such as new trucks.

Prentice pointed out that while state law will impose a tax cap on future spending, the initial budget is exempt from that requirement. Another part of the public conversation, Prentice said, will be an explanation of the costs of establishing the district. “We’re facing some unexpected expenses in our first year,” he explained, in particular, insurance, which had been part of the town’s coverage but now falls to the district. “Our insurance costs are amazing,” Prentice said. “It looks like the increase will be substantial.”

Prentice said the date of the fire district vote, Dec. 13, makes little sense, but is determined by state law. “At some point someone should look into that,” he said, suggesting it would be better if aligned with the November elections.

In the inaugural vote, the number of votes a candidate for commissioner receives will determine the length of his or her term. The candidate who gets the most votes will serve five years; the second-place finisher will serve four, and so on, with the fifth-place finisher serving a year. This is done to stagger the commissioners’ terms in office. In subsequent years all terms will be for five years. The commissioners are volunteers, but the treasurer (who serves a three-year term) and secretary (appointed annually) are paid positions.

For Prentice, being part of the new fire district is about community service and tradition. “I’m a lifelong resident of Garrison,” he said. “All my parents’ friends were fire company members. I’m 69 years old and this is an opportunity for me to do something for the fire company and to get everyone comfortable with the fact that we have a good fire district. It’s the continuation of a long tradition that dates back to 1929,” when the company began.

Garrison’s fire commissioners meet on the first and third Monday of each month at 7 p.m. at the firehouse on Route 9. (If Monday is a holiday, the meeting shifts to Tuesday.) All meetings are open to the public. On Monday, Aug. 29, at 7 p.m., the commission will meet to discuss the budget, and on Sept. 18 it will hold a public information session from 1 to 3 p.m. at the Desmond-Fish Library. Another public hearing will be held on Oct. 18 to discuss the proposed budget.