Sgt. Michael Szabo of the Putnam County Sheriff’s Department has been named the state’s Marine Law Enforcement Officer of the Year.

Sheriff Donald Smith praised the sergeant for his outstanding service in the county Marine Unit, pointing out that Szabo played a key role in organizing a boating event on Lake Mahopac that raised funds for veterans groups. The sheriff called the sergeant “a great sheriff’s office ambassador for community policing in Putnam County” and said his family could rightfully be proud of him. 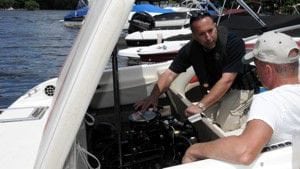 Szabo has trained more than 400 residents in boater safety and instructed other officers in marine law enforcement. The citation noted the officer’s “fun and creative approach” to encourage children to wear life preservers by handing out ice cream treats to youngsters seen wearing them while boating with their families on Lake Mahopac.

The selection committee for the citation was made up of officials from the Bureau of Marine Services, a division of the New York State Office of Parks, Recreation & Historic Preservation.