Want to mix your fitness training with Motown? Is your eight-year-old drawn to the cello? After years serving the Kingston community, the Center for Creative Education has opened a satellite in Beacon at 464 Main St., where it is offering classes like these, with more to follow in the fall.

The nonprofit designs its programs to reach “kids who wouldn’t otherwise have access to high quality arts programs,” explains executive director Drew Andrews. No child is turned away because his or her family is unable to pay, and its programs, which run the gamut from dance to computer to spoken word and visual arts, are open to the public. CCE also works with schools, community centers and religious institutions “to provide a platform for young people and adults to have a voice, to learn more about each other, to share, to reflect,” Andrews says. 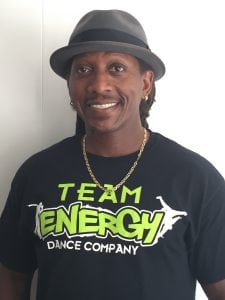 Drew Andrews (photo by A. Rooney)

CCE was founded in Seattle in 1987 by percussionist Evry Mann, stemming from his work with the homeless. After moving to New York, he started a drum ensemble to keep kids engaged after school. A decade later, in 1997, the Percussion Orchestra of Kingston, or POOK, was born. It has since given hundreds of concerts.

A dance fitness program was the second component of CCE. Born in Brooklyn, Andrews, the founder of the hip-hop dance troupe Energy, moved to the Kingston area to become a corrections officer. But, he found, “I didn’t want to work on intervention. I wanted to work on prevention.” He studied at Alvin Ailey and with Debbie Allen’s company before dancing with salsa teams and has recently taught and studied in Cuba.

In 2001 Andrews formed the Energy Dance Company at the Kingston YMCA. A teacher took the class and thought it would resonate with kids, so Andrews partnered with Mann. They found music and dance to be a natural fit and secured a studio. “We placed a special emphasis on offering programs to kids that are underserved, who didn’t have this at arm’s reach,” Andrews says. The kids in their classes began to do better at school. 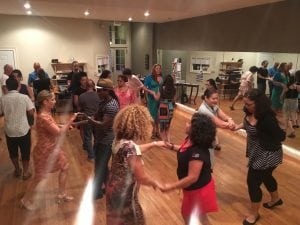 Learning to salsa at the Center for Creative Education (photo provided)

In the years since, they have seen a large number of students not only graduate from high school but attend college, where they continue to take classes in the arts. Some have returned to CCE to teach. Other teachers have discovered and joined CCE after attending a performance or through the Hudson Valley artists’ community.

“Some years ago we perceived a need in Beacon, and at the same time, a new energy there,” Andrews says. “We began offering a program at South Street School, then decided to open a studio, smaller than Kingston’s, but with the same concept.”

As in Kingston, the space, located on the east end of Main St., near Beacon Bagel, offers programs for kids and adults. Dance is at the forefront for now, with ongoing evening classes in tango, salsa and hoop dance aimed largely at adults, some followed by open dance sessions to show off newly mastered steps. In the fall, the classes will expand to include pre-schoolers through teenagers and go beyond dance to drumming and storytelling, Groove (a program for kids to explore “moving in their own way”), spoken word, visual arts, theater programs and DanceXFitness, a blend of dance, kickboxing, strength training and soul line-dancing created by Andrews. 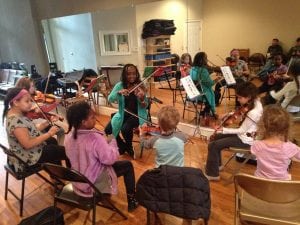 A program called Arts Commando Ensemble, or ACE, will blend spoken word, social justice work and hip-hop into a piece choreographed, conducted and composed by students and performed at the space. And the violinist Gwen Laster’s Creative Strings Improvisers’ Orchestra, which took place at CCE over the summer, will return.

CCE, which is funded through the efforts of its board, a booster club, performance donations and grants, has plans beyond Kingston and Beacon. As well as a capital campaign to move from its bursting-at-the-seams space in Kingston, it hopes to expand into Peekskill. It is also looking at training younger, Poughkeepsie-based artists to become teaching artists.

“Artists are great at many things, but we all need to learn how to share and become nimble enough so young people can integrate themselves into it and make changes,” Andrews says. “Our programs use the arts to teach basic life skills such as persistence, teamwork, discipline, focus and mastery. We place a strong emphasis on having a healthy mind and a healthy body and the importance of education as a path to a better life.”