Gallery owner and artist Marina Yashina, of Cold Spring, died of a brain tumor on Aug. 21, 2016. A memorial celebration will be held at 11 a.m. on Sunday, Sept. 4, at the Chapel Restoration, 45 Market St.

Marina was born in Moscow in 1945 and attended the Moscow Art School for gifted children and in 1967 graduated from the Fine Art Institute there. In 1974 she immigrated to New York City with her eight-year-old daughter, Olga, where she pursued a career in fine art restoration, working with some of the finest conservators in the city. 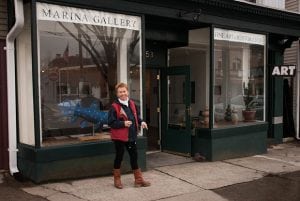 In 2002 she moved to Cold Spring, where she opened a studio space on 153 Main St. for her high-end restoration work; she was among the team that restored the magnificent ceilings at Grand Central Station. She also worked on the Kremlin building in Moscow. In partnership with artist Martee Levi, she began to show artwork, and so Marina Fine Art and Restoration also became known as Marina Gallery. She could be found there most afternoons, dispensing wisdom and dog treats. A gifted painter, champion fisherwoman and avid poker player, she will be much missed by her many friends.

In lieu of flowers, memorial donations may be made to the Putnam Humane Society.