What could possibly be better than butter — that “coagulated sunlight,” as pronounced by the Irish poet and playwright Seamus Heaney in his ode to the process of its manufacture, “Churning Day”?

It has been said pure white milk alchemically transmuted into gold was the result of a happy accident: when nomadic tribes of Central Asia transporting milk on camelback across the desert in leather saddlebags reached their destination, they discovered the transformative results of the journey. The kidney-jolting ride accomplished the churning necessary to emulsify milk’s butterfat into a rich, spreadable solid.

This magic-cum-science circulated throughout the civilized world: butter was heartily embraced by the Greeks and Romans who (as the ancient Hebrews did) considered it food and medicine. In India, butter was considered sacred, a reverence I completely understand.

And although southern Europeans exhibit a culinary preference for oils (particularly that of the olive), northern Europeans solidly adopted butter — none more so than the Normand French who made it a science, an art and a raison d’être.

Truly, what could be better?

Which brings us to buerre noisette, or brown butter. Its French (quelle surprise!) appellation an homage to the superior sleight-of-hand that occurs when sweet (unsalted) butter is heated just enough to boil off the (approximately 16 percent) water content, and — if watched carefully — magically browns the milk solids (the proteins and lactose or milk sugars) producing a golden, fragrant and nutty (hence the moniker noisette: hazelnut) ingredient that is, well … even better!

(This effect is a textbook example of the storied “Maillard reaction” responsible for many favorite flavors including browned/seared meat, roasted coffee, chocolate, maple syrup and toast. Buerre noir — black butter — is of the same process, only exaggerated and ghee, the preferred Indian cooking fat, is produced in much the same manner except that the browned milk solids are ultimately strained out.) 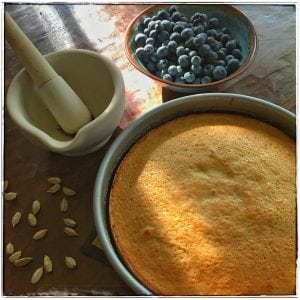 Brown butter can be used in just about any recipe that calls for butter and imparts a whole other level of taste, richness and complexity. It is the secret to many classic French sauces — for seafood, vegetables, meats or eggs. And this enchantment isn’t strictly limited to savory dishes — sweet baked goods benefit from the substitution, and brown butter is the defining ingredient of the celebrated French financier, a small rectangular cake of flour, egg whites and powdered sugar.

This recipe for brown butter shortcake is an adaptation of that idea. Brown butter also pairs well with fruit, so I’ve included a simple recipe for a blueberry compote. (Most any berry would do, and pears or bananas are even suggested.) But truthfully, a light dusting of powdered sugar might be more than enough. It’s hard to top perfection.

Heat oven to 350° F. Place a 10-inch cake pan on parchment paper; trace and cut out a circle. Grease the pan (bottom and sides) with one tablespoon butter; press the parchment circle into the pan. Flip the parchment over, buttered side up, and sprinkle 2 tablespoons flour on parchment. Tap to coat bottom and sides of pan and discard the excess. Sift 1 cup flour, baking powder and salt together and set aside.

Melt 1½ sticks butter over medium-high heat. Simmer, whisking often to incorporate any solids that sink to bottom. (This whisking is important to avoid burning). The butter will foam and “spit”—this is the water boiling off. Continue whisking and when butter is golden-amber and smells nutty (about 4 to 6 minutes), remove from heat and pour into a heatproof measuring cup to cool at room temperature.

Bring a large pot with about an inch of water in it to a simmer over medium-high heat. Set a large heatproof bowl over the boiling water (bowl should not touch the water; this is a primitive double boiler). Reduce heat to low and whisk eggs and sugar together in the bowl. Continue whisking until the mixture has tripled in volume (4 to 5 minutes) and remove the bowl from the heat.

Using an electric hand mixer whip egg-sugar mixture on high speed until thick and pale (about 2 to 3 minutes). Reduce speed to low and slowly drizzle in warm butter. (Adding it too quickly will cause batter to separate.) Use a rubber spatula to scrape browned bits into batter.

Using a large whisk, gently fold one-third of the dry ingredients into the batter, then half the buttermilk. Repeat, ending with last third of dry mixture. Pour batter into the cake pan and bake until cake sides pull away from pan and center resists light pressure, about 20 to 25 minutes.

Remove shortcake from oven and let rest for about 10 minutes. Run a knife around edge of pan to release cake and invert onto a rack to cool completely. Slice into wedges and serve topped with blueberry compote.

Crack the cardamom pods, remove and finely grind the seeds in a mortar and pestle or spice grinder. Mix the cardamom, blueberries, sugar and water in a saucepan and bring to a boil over medium heat. Reduce heat and simmer, stirring occasionally, for about 10 minutes until sauce thickens. Remove from heat and cool.