Jay and Polly Armour established Four Winds Farm near Gardiner in 1988. As original vendors at the Cold Spring Farmers’ Market, they have cultivated a devoted local following, especially during the heirloom tomato season. I caught up with Jay on Aug. 24 at his 24-acre farm, which produces an amazing array of food. His responses have been edited. 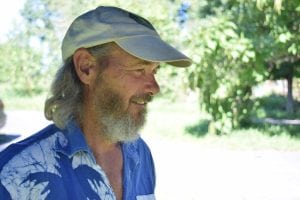 Why did you get into farming?

Because I liked making my own tomato sauce. I wanted organic tomatoes but realized no one produced them in quantity on Long Island [where they were living]. I thought maybe I should consider farming.

How does the Cold Spring Farmers’ Market compare with others?

Cold Spring is what has kept this farm alive. It’s why we’re still here. I think about this a lot. At one time we were small and that market was small. The market grew as we grew. Introducing heirloom tomatoes to that market was the best thing I’ve done in my life!

Is there a difference in how things sell at different markets?

The difference is amazing. In Cold Spring it’s tomatoes. In Woodstock it’s blueberries. For a while New Paltz was kale; now it’s a little bit of everything.

Where else do you sell your produce?

Vera’s Philipstown Market and Foodtown in Cold Spring. And Vera has the best mozzarella in the Hudson Valley.

How much farming background did you have?

None. Teaching was the logical profession to go into because it would give me summers off to farm. I got a teaching degree and we moved up here [to Gardiner] and I got a job teaching in one of the prisons. I stayed for 14 years and ended up loving it. There were some good perks: a good union, a good pension, good health care. 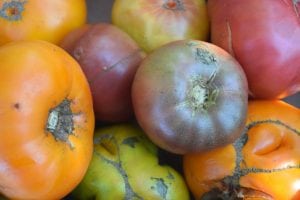 Heirloom tomatoes are a big seller at the Cold Spring Farmers’ Market. (Photo by M. Turton)

I like the fact that I’m doing things differently, and better, and slowly being recognized for it.

What do you hate about farming?

Some customers drive me crazy, especially the ones who want to get rid of all the pennies in their pocket. I don’t want them either!

Anything else drive you crazy?

People sometimes want oranges. They don’t understand why they can’t buy something that doesn’t grow in this area.

Would you want your children to be farmers?

My parents supported me in whatever I wanted to do, even if it wasn’t what they would have liked me to do. So I’ll support my kids in whatever they want to do.

What is your assessment of the state of Hudson Valley farming?

The local food movement has revolutionized the marketing of produce. When it started about five years ago, I felt like I was riding the crest of a tidal wave. All of a sudden there was demand for local, high-quality food. People understood how supporting a local farm was good for the environment, the community, the local economy. It was great to be already established as a farm and to be a part of that whole awakening.

What does this particular plot of land offer?

We are sitting right on a boundary where the landscape transitions from gravel to clay, from New Paltz down to Wallkill. Right along that line are numerous freshwater springs. Even during a drought, we don’t have to worry about water or our well going dry. 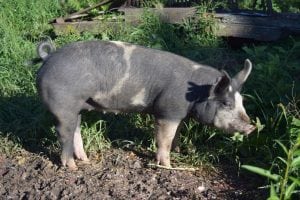 A Berkshire pig at Four Winds (photo by M. Turton)

What animals do you raise?

We keep a herd of 14 beef cattle. Primarily they supply manure that we compost and use in the fields. I mix it with horse manure that I buy. They also provide us with meat. We have a couple of Berkshire pigs, mostly for us, but we do sell the meat. And we still raise turkeys for Thanksgiving. But no more chickens. I don’t like plucking chickens.

Tomatoes are our cash crop, 46 varieties if you count the cherry and paste tomatoes. Plus chard, kale, onions, beets, carrots, peas, beans, potatoes, asparagus, winter and summer squash, blueberries, and we have apple and pear trees.

What do you do in the winter?

Ski, if there’s snow. I didn’t do much skiing last winter. I do a lot of hiking up in the Catskills, too.

How many people work on the farm?

Polly doesn’t work on the farm and I’m trying not to. We have two full-time and one part-time employee.

What critters pose a problem?

We are fortunate not to have a deer problem. Probably groundhogs are the biggest problem. And birds. They’re always digging up the soil looking for worms. They scatter plants all over the place. 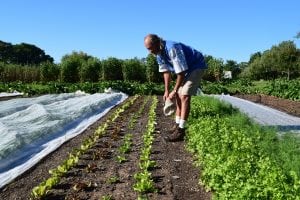 Healthy soil means healthy plants - and no need for herbicides or pesticides.  (Photo by M. Turton)

What’s the last book you read for fun?

I’m not much of a reader but I enjoy a Dick Francis novel once in a while.

What’s your pizza of choice?

Probably pepperoni. There’s a place down the road that’s the best. You can even get smoked duck pizza there.

Do customers become friends or is it strictly business?

I wouldn’t call them friends — we only interact at the market. But there’s some sort of a — I don’t know how to describe it — sometimes there’s a little more personal level of conversation.

What does a new tractor cost these days?

Do you run the Second Wind CSA here as well?

No, I rent them the land. They do their own planting, their own marketing. I don’t charge them a lot of rent, so it’s a good deal for them.

What is your take on the GMO debate?

It could have been a good thing but it went in the wrong direction. You could have had genetically modified corn that would enrich the soil — changing the famine issue in developing countries. Instead corn was modified to withstand herbicides, which increased corn production in the developed world rather than staving off starvation in the developing world. They say there is no herbicide residue, but I can’t believe that. And we’ve created a system in this country that produces food with very little nutritional value.

How do you thrive without using herbicides and pesticides?