While Cold Spring and Garrison offer their share of scenic waterfalls, a pleasant surprise lies just over the state line. Kent Falls State Park is a 295-acre expanse of natural pools and dramatic cliffs northeast of Kent, Conn. 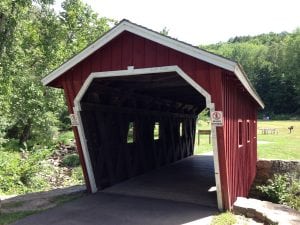 Entrance to the park. (photo by C. Smith)

After entering the park, visitors will notice a spacious picnic area with tables and grills. Beyond that is an impressive chain of waterfalls. Although swimming is prohibited, children and adults alike can be found wading in the shallow pool closest to the picnic area.

To the right of the falls is a wooden staircase leading to some of the more notable sights. Lookout decks are positioned at every few flights that jut out toward the cliffs, giving guests a closer look at the colossal falls and rock formations. The limestone has been carved into intriguing shapes and potholes. The true prize of the hike comes at the top, where you can see a dramatic 70-foot cascade. 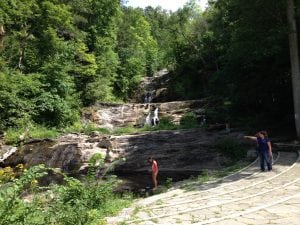 There is evidence that early Native Americans, who called the area Scatacook, fished and camped by the falls. The park was originally 22 acres in size, purchased in 1919 by the White Memorial Foundation and expanded over the years with donated or purchased adjacent land. In the 1930s, the Civil Works Administration developed the area and in the 1970s the Youth Conservation Corps of Connecticut reconstructed the trails.

The park is open during the summer months from 8 a.m. to 7 p.m. During the rest of the year it closes at sunset. Parking is $15 for out-of-state vehicles during the weekend and free during the week. Dogs are allowed but must be leashed. The park is located at 462 Kent Cornwall Road (Route 7) in Kent, about an hour drive from Cold Spring or Beacon.