What’s your name, where are you from and what do you do for a living?
I’m Katarina Pabon and I live in Maybrook. I am an activity specialist for the Boys and Girls Club of Newburgh.

What’s something we should know about your role — either something Thornton Wilder refers to, or something you’ve come up with yourself?
I feel as if my role is a young woman who is searching for a place to reside in, and is curious to know more about Grover’s Corners. 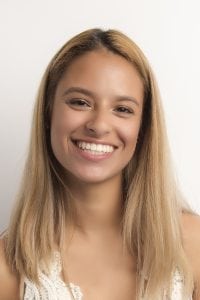 What has surprised you most about the workshop/rehearsal process?
What surprised me the most was how I was able to get in touch with my inner emotions, which brought me to tears. And to connect with another actor’s sorrow.

In what way does Our Town resonate with you most?
I was able to see life in a different view in which I’ve learned to appreciate life even more so. To live in the now, enjoy the moment , and appreciate those who have come and gone in my life.

What’s your name, where are you from and what do you do for a living?
My name is Ellen O’ Neill. I was born and raised in the Bronx. I now live with my husband, James (who plays First Dead Man) in a log cabin in Pleasant Valley amidst deer, bear, groundhogs, goats, sheep, chickens, ducks and turkey — and on Grand Street in New York City surrounded by Loho, Loisaida, Chinatown and Little Italy with Freedom Tower in clear view — amidst many off-Broadway theaters, restaurants and not that far from Broadway. I live in the best of all worlds.

I am a retired schoolteacher who taught at Copper Beech Middle School in Shrub Oak for close to 30 years. After teaching I became a fundraiser/public relations specialist for arts organizations and schools. Most important, I am the mother of four, the grandmother of five, with grandchild number 6 due in September. I am the wife of Jim who married me and my four kids 40 years ago. 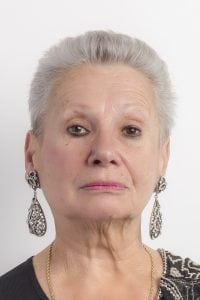 What’s something we should know about your role — either something Thornton Wilder refers to, or something you’ve come up with yourself.
I’m dead! The wonder of this is my very first role as an actor was when I was 14: I played the First Dead Man in Mount Saint Ursula’s production of Our Town. Standing in front of a chair, first row, stage left, I shouted my lines and dreamed, “Someday I’ll be a star.” That hope never completely disappeared.  But as they say, “Life got in the way.”

There were so many things I wanted to do and did. Oh, I acted but never really “made it.” So finally, after 63 years, I’m dead again — but this time my dream has come true: I’m part of HVSF (a subscriber to the festival since its inception), I’m acting in the company of Sean McNall and many others whose careers I’ve followed for years, and I’m working with people like talented professionals Davis McCallum, Emily Knapp, John Christian Plummer, Antoinette Robinson and others. I’m celebrating community with gifted, young and old neighbors I would never have met without this opportunity. To me, that makes me a star. My dream has come true.

In the ensemble, my role is much more than who I am or ever could be in real life. I play wind, rain, all sorts of weather, music, hymns, songs, birds, crickets, stars and time passing. I am one with everyone who has ever lived or died in Grover’s Corners. My full address includes, as Rebecca says, “Grover’s Corners: Sutton County; New Hampshire; United States of America; Continent of North America; Western Hemisphere; the Earth; the Solar System; the Universe; the Mind of God.” I am aiming to be one, together, with the whole world.

I also  play a woman among the Dead waiting to “Let The Mystery Be.” I haven’t lost sight of the weather and my attitude is still very much intact. I do not approve of George laying prostrate on Emily’s grave. ”Goodness! That ain’t no way to behave!” Maybe a number of those blatantly judgmental statements is why I’m still here. Why else might I be waiting? Maybe I’m waiting for heaven, purgatory or, Heaven forbid, Hell! Maybe this is all there is! At the moment I am a little annoyed with Emily for reminding me I might have to wait because I have much to regret and didn’t appreciate enough. Or is the Stage Manager right? I’m here “for the eternal part in me to come out clear?” I hated waiting in life and I hate waiting in death. Oh well, at least I’m not alone. All humanity, past, present and future are here with me.

What has surprised you most about the workshop/rehearsal process?
I have been acting over 20 years in plays, films, and commercials, and have taken copious, extraordinary workshops and courses. This is an unusual process: focused yet different, and exciting. Cosmically and comically insignificant? Why am I walking around with my shoe on my head? What compels me to obey? I not only put my shoe up there but anyone’s and everyone’s shoe! I do this on command. Why do I wonder?  I just do it. And the wondering is wonderful, raising more questions and still more answers.

I am willing to let go, accept. Nothing seems important but everything has possibility. In the play, Emily begs her mother, “Look at me” and later on cries, “It goes so fast. We don’t have time to look at one another.” In our rehearsals, we look at each other. I see myself in Emily and all the characters in the play. Don’t ask me how, but I see myself in those faces in the circle we stand in. I see my raised eyebrow on Melissa’s face and the soft smile on Ann’s becomes mine. I am looking into a mirror to my soul. I see my son in one young man, my anger in another. I share secrets with strangers who are no longer strange. We all become interchangeable.

I am thankful to our director, John Christian Plummer, and this cast of generous actors for this “tie that bonds,” this truth. I am learning Alexander Technique, vocal exercises, how to make sound effects from my body and miscellaneous found objects. I, who can not sing a note, am singing because of Matt, Amanda, Melissa, Mike, Josie, Liz and all the rest of the dead and not-so-dead who teach me and support me.  So what surprises me? Everyone and everything. All is grand!

In what way does Our Town resonate with you most?

I have lived the “daily life” unremarkably and remarkably like everyone else in this world,  gone through love and marriage and divorce, and love and remarriage, and now am aged 78, at Act 3 of my life. I already knew there was nothing new; same old questions with either no answer or too many answers. But after this Our Town experience, I have a lot more hope and less fear of living, loss, and dying. Meeting so many people who I can connect with and trust has been eye opening and unique, and it’s not over yet!

What awe, what respect I have for Davis McCallum and Emily Knapp, as well as all members of the Hudson Valley Shakespeare Festival, for bringing Our Town to us. I believe that this project is the great start for communities in the Hudson Valley to look at and learn from each other. I am looking forward for HVSF’s next step in teaching humanity through the arts. It has to succeed in making us think, act, love and come together. A special reward is that I am doing this with my husband. I am so thankful that HVSF chose both of us to be part of something so special and great!