Complaints made about three points of conduct

Alan Steiner will step down as a judge in the Philipstown Justice Court and acting justice in the Cold Spring Justice Court effective Sept. 20, following a ruling by the New York State Commission on Judicial Conduct stemming from complaints it received about his conduct. Steiner, a Garrison resident, has served as a judge in the Philipstown court since 2000. He had already chosen not to seek re-election this fall.

In its ruling, issued on Aug. 1, the commission stated that Steiner posted political statements on Facebook (judges are prohibited from being involved in politics to maintain the appearance, at least, of impartiality); delayed a small-claims decision for more than a year and failed to complete required continuing education courses in 2010, 2011 and 2014.

After Steiner removed the Facebook posts, resolved the small-claims case and completed the required training, the commission discontinued proceedings and closed the case. However, it stipulated that he step down and agree not to seek or accept a judicial office any time in the future. Steiner, 71, can continue to practice law in New York, although he closed his private practice several years ago. 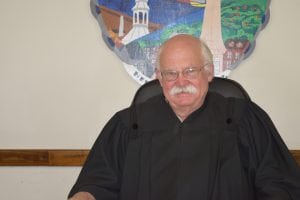 In a letter of resignation to Philipstown Town Supervisor Richard Shea dated July 23, Steiner indicated that “a number of circumstances” had led to his decision to step down. While he didn’t mention the commission’s investigation, he did allude to some of the issues it raised, along with a personal matter. “My main reason [for resigning] is that my wife had brain surgery last week and is facing, what we expect to be, a long period of recovery,” he wrote. “In addition, I have found it to be a strain to render decisions in a timely fashion and to stay current with my Continuing Legal Education.”

In an interview with The Current, Steiner said the commentary he posted on Facebook was solely about national politics, not local issues.  “Technically that was a violation of the rules,“ he said, but “it is silly to think” having opinions about the presidential race or Congress would color his judgment on the bench.

Regarding his delay in concluding the small-claims case Steiner said, “it just slipped by me. I wasn’t as diligent as I should have been.” He said it was ironic that the plaintiff, who filed the complaint with the commission, in the end was “very happy with the decision. He thanked me.”

Steiner also recently came under scrutiny for his involvement in the Preservation Company, a Peekskill non-profit that provides grants to low- to moderate-income residents for home improvements and first-time home purchases. The organization, which Steiner chairs, also helps residents find housing and deal with issues such as evictions and overdue rent.

Earlier this year, Peekskill Mayor Frank Catalina filed a complaint against Steiner with the commission over the Preservation Company’s awarding of $45,000 in grants to Drew Claxton, Peekskill’s deputy mayor, and her son, for improvements to a home they co-own. Elected officials are generally not permitted to receive such grants. The commission dismissed the complaint as being “without merit.”

Steiner told The Current that elected officials can receive grant funds in some cases but that a waiver must be approved beforehand. “If we had known that [a waiver was required], we would have applied for it and I’m confident it would have been approved,” he said.

Steiner said that his priority now will be to care for his wife, Glenn, who continues to recover from surgery.

The Philipstown Town Board has yet to name an interim justice to replace Steiner, leaving Stephen Tomann as the lone town judge until after the November election. Democrats Camille Linson and Luke Hilpert will face off in a primary election on Sept. 13, and the winner will face Republican Faye Thorpe on Nov. 8 in the race to fill Steiner’s seat.

One thought on “Philipstown Judge Steps Down”