On the morning of Sept. 2, Hudson Highlands residents received a jaw-dropping preview of the show as the U.S. Air Force Thunderbirds made a number of low-altitude, high-speed passes over West Point.

The military academy’s Black Knights Parachute Team opened the show at Stewart by delivering the Stars and Stripes with a jump from 5,000 feet. 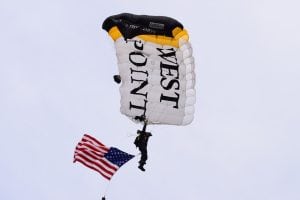 The Black Knights opened the show.

The Thunderbirds were the featured act, closing the show on both Saturday and Sunday afternoons. The six F-16 pilots performed 40 high-precision maneuvers, including their trademark diamond formation.

The three-man crew of a C-17 Globemaster III cargo plane stationed at Stewart Air National Guard Base demonstrated the enormous and surprisingly quiet aircraft’s maneuverability at speeds as slow as 120 mph. In contrast, a Navy FA/18 Hornet capable of flying 1,200 mph made several thundering passes.

The Geico Skytypers were again a hit, flying six vintage Texans in tight formation. Known as the Harvard in England and Canada, the Texan was used to train thousands of Allied pilots and also flown in combat. Only 11 are known to exist. 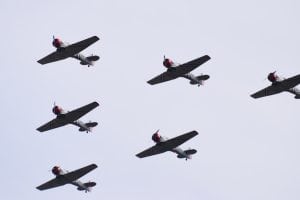 Another World War II-era plane, the B-25 Mitchell bomber, made a return visit to Stewart. The twin-engine craft made its mark when Lt. Col. Jimmy Doolittle led a flight of 16 B-25s on a raid on mainland Japan four months after the attack on Pearl Harbor.

Pilot Kent Pietsch grabbed the crowd’s attention when he attempted to land an Interstate Cadet on the roof of an RV traveling at 60 mph on the runway. After one aborted attempt, Pietsch stuck the landing.