It hasn’t been an easy year for farmers in the Northeast, including  those at Meadowbrook Farm in Wappingers Falls and Fishkill Farms in Hopewell Junction. Both lost a significant part of their harvests to extreme weather this past winter and spring.

The mild winter with early warm temperatures in February and March caused fruit trees to set flowers sooner than usual. Then the frost in April killed the buds when, for three days, nighttime temperatures fell below freezing.

Some apple varieties disappeared completely. Fishkill Farms won’t have any Empires, a popular smaller variety, and Tricia Greco, assistant manager at Meadowbrook, said she doesn’t expect any apples there in early 2017. “We won’t have apples into the following season this year,” she said. “Last year, we had apples into April.” The season is starting later, as well. Usually apples are ready to pick by now. 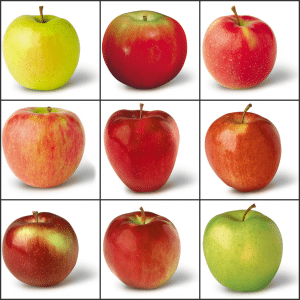 Can you name your New York State apples? Answers below.

Josh Morgenthau, the owner of Fishkill Farms, said he manages his fruit losses by planting more vegetables and diversifying his crops. In recent years, Fishkill Farms has held events such as a Tomato Festival, farm dinners and outdoor yoga. It also will launch a line of hard cider in coming weeks that uses the farm’s heirloom apples.

Both farmers recommended that pick-your-own fans come early, because by mid-October supplies may be running low.

Fishkill Farms, at 9 Fishkill Farm Road, has Gala, Jonamac, Cortland, Honeycrisp, Golden Delicious, Red Delicious and other varieties of apples, plus cider and cider donuts beginning in mid-September. It is open daily from 9 a.m. to 6 p.m.. Admission is $5, with children ages 12 and under admitted free. Check Facebook for updates.