As election day approaches on Nov. 8, a number of offices will be contested locally, including the seats held by U.S. Rep. Sean Patrick Maloney in the 18th District and Frank Skartados in the 104th district of the New York State Assembly.

But while many people declare their intention to run, especially for Congressional seats, some raising tens of thousands of dollars, relatively few end up on the ballot.

The chief obstacle is signatures. Candidates at every level — from village and city councils to governor — must file a petition with the county or state election board. The number of signatures required varies depending on the office, the party and the number of registered voters.

The process of finding enough qualified voters to sign to get a candidate’s name on a primary ballot can be formidable and, ultimately, derailing.

In January, Diana Hird, a Cold Spring Democrat, announced her intention to challenge Maloney, who also lives in Cold Spring, for his seat in Congress. Candidates for congressional districts in New York must gather 1,250 votes from registered voters in the district who are members of their party. Each voter can only sign one nominating petition for each office.

Three months after her announcement, Hird said she had fallen 44 signatures short. 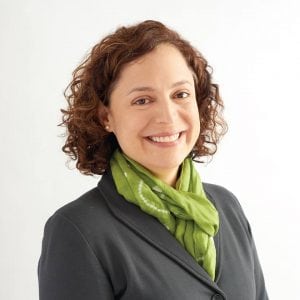 Gathering signatures is only half of the battle if anyone questions their validity.

In Beacon, Ward 4 council representative Ali Muhammad said in June that he would challenge a fellow Democrat, the incumbent Skartados, for the 104th District Assembly seat. Muhammad needed signatures from at least 500 registered Democrats in the district, which includes Beacon and Newburgh.

He submitted 608, but an objection from a Skartados supporter prompted a state Board of Elections review that ruled 142 invalid, leaving him 34 short. Muhammad considered running as an independent, but that would have required collecting 1,500 valid signatures by mid-August, all from district residents who had not already signed a petition for the office.

“You have to rely on other people [to gather signatures], and that’s the difficult part,” Muhammad told The Current on Sept. 2. “You need a machine behind you, and that’s what’s good about the [party] committees. They do a lot of the groundwork.” 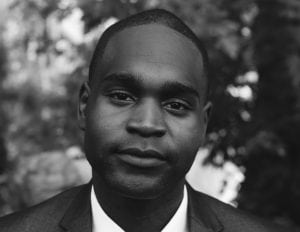 State Board of Elections spokesperson John Conklin said that a common mistake occurs when  signers tell the person circulating a petition that they are registered to vote, when in fact they are not. Or they may be registered, but not in the candidate’s party.

Further, “there’s a lot of confusion” among voters about eligibility for a primary election versus the general election, he said. For instance, a person may typically vote for a specific party, but if he or she is not registered with that party, the person is not eligible to sign a candidate’s petition.

Another common error is listing an address that does not match the address on the voter registration record. “You may write ‘Delmar’ [an unincorporated hamlet in Albany County] on a petition when you actually live in the town of Bethlehem,” Conklin said. “That’s the specific answer that’s needed on the petition.” 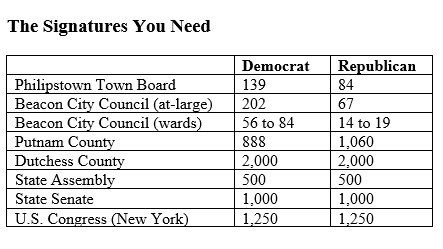 Unless a petition is challenged, it is presumed by the election board to be valid. And challenges can only be filed by a member of the candidate’s party, not the opposition.

An objector will typically claim that some or all of the signatures on the nominating petition are invalid, which is why candidates usually gather many more than required. For instance, in the race for the Republican primary for the 19th Congressional District, challenger Andrew Heaney filed 2,740 signatures, more than double the 1,200 required.

Like many challengers, Heaney portrayed the excess signatures as a sign of support when “the deck is stacked against us” by “Albany insiders” and “New York’s arcane election law.”

Another Republican candidate in the 19th District, Bob Bishop, also portrayed the petition process as a tool that benefits incumbents. He wrote on Facebook on Apr. 15: “Yesterday I was proud to file for the Republican primary with over 1,850 signatures, 600 more than required by law. The petition process is designed to benefit candidates who are a part of the political class and keep political outsiders like myself off the ballot.” (Bishop’s petitions were disqualified; Heaney lost in the primary to John Faso.) 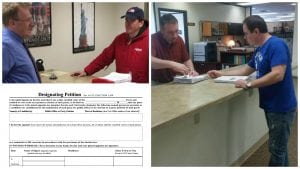 Filing petitions often becomes a political statement for challengers such as congressional candidates Andrew Heaney and Kenneth Del Vecchio, both of whom posted photos online showing them delivering stacks of petitions to the state election board.

After filing his petitions, Kenneth Del Vecchio, a Republican candidate in the 18th District, wrote on Facebook that the process of getting the 1,250 signatures had been “grueling” but that only a handful of people he asked had declined. Del Vecchio lost the primary by a wide margin to Phil Oliva, who will face Maloney in November.

After a challenge is filed, a bipartisan team of Board of Elections officials review the signatures. If enough invalid signatures are found to put the candidate below the threshold, he or she may request a hearing to appeal the findings, but only for the signatures in question. New signatures cannot be submitted.

It becomes a “numbers game,” Conklin said, as candidates seek to “rehabilitate” signatures while an objector seeks to prove them invalid.

Sandy Galef, who represents Westchester and Putnam counties in the state assembly, in August announced a proposal to prevent what she called “identity theft” on Opportunity to Ballot petitions.

These petitions are commonly circulated by candidates who want to run as a member of a party but have not received the party endorsement — a practice referred to as “stealing the line.” After Galef went to court, an Albany County judge invalidated an Opportunity to Ballot petition for the Women’s Equality Party that, had it been accepted, would have forced a primary vote for Galef, a Democrat who is running unopposed.

Galef, who was endorsed by the Women’s Equality Party and has its line on the ballot, said the petitions were circulated with the names of three residents of Putnam County who said they had not signed it. (Because the Women’s Equality Party is small, only three valid signatures were required to get a candidate’s name on the ballot. With this type of petition, the “candidate” would have been unnamed, with a space for a write-in.)

Galef said the petition was submitted anonymously to the state Board of Elections but that an official timestamp on the document showed it was filed at the exact same time – 4:25 p.m. on July 21 – as a petition by Gregory Purdy, Jr., the son of her Republican challenger.

“As a member of the New York State Assembly Election Law Committee, I believe strongly that to deceive the public and to misuse the identity of unsuspecting individuals is horrific and dishonest,” Galef said in a statement. “We must put in place a law to preclude this from ever happening again.” Her proposal would require anyone whose name appears on an Opportunity to Ballot petition to be notified.