A sixth revision to the secret lease between the county and Butterfield Realty to rent space at the former Butterfield Hospital site in Cold Spring for a senior center was approved on Sept. 14 during a special meeting called by the chairwoman.

The gathering was not without the usual debate, confusion and heated exchanges that have accompanied the matter over the past several months.

The county plans to lease 6,000 square feet in the Lahey Pavilion over 15 years at a total cost of about $4.5 million, including rent, taxes, common area charges and renovations. During its regular monthly meeting on Sept. 6, the legislature approved a fifth amendment to the lease and an $800,000 bond referendum to help pay for the $1.3 million project.

The Sept. 14 meeting opened with Kevin Wright (R-Mahopac) objecting to the board accepting correspondence from the Cold Spring Planning Board, which proposed an amendment to a graph related to the transportation provided to seniors. He noted the proposal had not been received by the legislature at least 48 hours prior to the meeting, as required by law.

Asked to clarify, legislative counsel Clement Van Ross said because the Physical Services Committee approved proposed amendments to the lease at its Sept. 12 meeting, the 48-hour deadline had been met. However, he said, the last piece of correspondence received from the Cold Spring Planning Board was dated Sept. 13. “In this case, it’s difficult to see that 48 hours was met,” he said.

Barbara Scuccimarra (R-Philipstown), was clearly perturbed by this judgment. “This is an atrocity, and I don’t believe you are correct, Clem,” she said.

Chairwoman Ginny Nacerino (R-Patterson) explained that the Cold Spring Planning Board had approved the proposed amendment well over a week before, but because one member was absent, it had waited as a courtesy for that person’s input.

The change to the lease, she said, involves seven words: “…and any extensions and/or renewals thereof.”

“That’s what you’re objecting to,” Nacerino said to Wright.

Nacerino said she understood Wright’s diligence to follow legislative process but argued that the delay was counterproductive.

“We’re playing games with this now,” he said. “It’s not that you have a problem with the language — this is spite. Kevin, you’re just wasting our time.”

In a memo dated Sept. 1, Deputy County Executive Bruce Walker outlined the estimated costs of building out the senior center at the Butterfield development. The estimate totaled $1.5 million but the legislature has reduced that amount to $1.3 million.

Dini LoBue (R-Mahopac Falls) said the board put itself in the situation by “rushing” to approve the latest amendment.

“Why did we have to call a special full meeting?” she asked. “This has been going on since November, and in two weeks we’re going to have a [regularly scheduled] full meeting.… This is the sixth revision and it’s embarrassing. And we’re here again, not sure if this is the proper language, and we look like fools. This is ridiculous.”

Roger Gross (R-Brewster) encouraged his colleagues to wait two weeks for the full meeting on Oct. 4 to consider the proposals. While he acknowledged that “the house has the five votes” to approve the lease, “let’s give it due process.”

Nacerino countered that the reason she called the meeting was to get the project back on track after it was “railroaded” at a contentious legislature meeting on Sept. 6.

“What occurred at the Sept. 6 meeting was exactly what occurred tonight,” she said. “The reason for the special meeting was to offer resolve. We just want to put this to bed. Now we’re going to go to October and do it all again.” 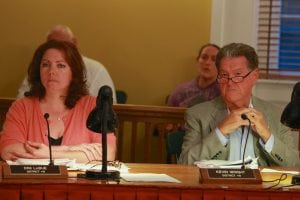 After hearing the grievances of legislators who wish to have the lease finalized, and after emphasizing that the “underlying principle” of following process is of utmost importance, Wright backed off his objection.

“I know this language will pass in two weeks, so I withdraw my objection,” he said.

That allowed the legislature to vote, although because it was as special meeting, unanimous consent was needed. However, LoBue voted no.

“Really, Dini? Really? You make me sick,” Scuccimarra said before leaving the room to make a phone call. When the legislator returned about five minutes later, she proposed accepting the amendment approved by the Physical Services Committee two days earlier but not the more recent seven-word change. That vote carried, 6-3, with Gross, LoBue and Wright voting no.

It was not stated whether the legislature will consider the seven-word change on Oct. 4 or scrap it altogether.