Sipping beer dates to Babylonia at least 6,000 years ago. Much more recently, four Highlands breweries have joined a nationwide explosion in the production of craft beers. We sent Senior Correspondent Michael Turton, who seemed not the least reluctant, to visit each brewer.

Peekskill Brewery opened nine years ago on the city’s waterfront. “We have 12 beers on tap now but over the year we’ll make 40 to 50 different styles,” said owner and founder Keith Berardi. “Compared to straight production breweries we have a ton of flexibility to make beers almost on a whim.” (Berardi and head brewer Matthew Levy once fermented a batch of Soft Pour Corn. The name demands careful pronunciation.)

About half of the 2,400 barrels produced each year are consumed at the pub and restaurant, and the others are distributed between Albany and New York City. Berardi said only about 10 varieties are sent out. “Our strategy is to put beer out into the market in order to entice people to come here,” he said. The brewery’s top seller is Eastern Standard IPA, and it has won major awards for its Amazeballs Pale Ale, High Standard and Imperial IPA. 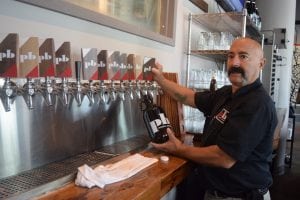 When asked for his personal favorite, he was cautious. “Whatever beer I have in my hand at the moment,” he said. But when pressed, he mentioned a coffee-based pale ale and a pilsner, Skills Pils.

Newburgh Brewing Company opened in 2012 and produces 4,000 barrels a year of 30 or more beers. Its second-floor Tap Room at 88 Colden St. has a spectacular view of the Hudson.

Its core offerings are Cream Ale, Brown Ale and Mega Boss IPA. “In the past year we’ve ramped up our canning,” says brewer Amit Ram, and cans are available in supermarkets and bars from New York City and northern New Jersey to Albany. 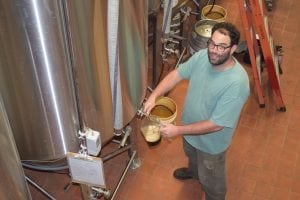 Ram enjoys celebrating his work. “When brewmaster Chris Basso and I brew a new beer we’ll drink it in the Tap Room at the end of the day … to remind ourselves of the finished product.”

He considers beer an agricultural product that, like bread, is best consumed fresh, although some styles need to mature. “We experiment with aging in wine-and-spirits barrels, some for souring and others for that wood-and-spirit flavor.”

He and Basso are open to suggestions for new brews from Tap Room customers. “Sometimes they’ll ask for something we’ve made before or they’ll suggest something new for us to try,” he says. Ram recently created a beer soured in multiple barrels, some of which had raspberry blended in. It’s for his wedding — the cans feature images of him and his fiancé.

Mike O’Herron opened the 2 Way Brewing Company in Beacon in 2014. As owner and head brewer, he specializes in using a house strain of yeast found on black raspberry bushes on the Newburgh farm where he grew up. The yeast is for brewing a pilsner called Confusion and the X-1 IPA. “It’s kind of a New Age farm house IPA; it’s less bitter,” he said.

The brewery, which O’Herron named for the Hudson River (which, of course, flows both ways) is located at 8 W. Main St. and produces a few hundred barrels a year. The bar at 18 W. Main St. has as many as eight brews on tap; Herron says Confusion and Climb High Pale Ale are top sellers, as well as seasonal offerings such as Oktoberfest, and that sour beers are becoming more popular. 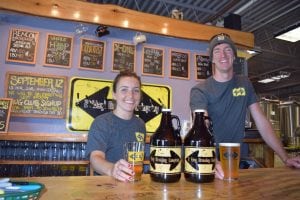 O’Herron says he plans for modest growth. For now that means producing draft but no cans or bottles. The bar does sell growlers.

A restaurant serving pub food will open at 2 Way soon, O’Herron says. “And I’d like to do a cheap bowl of rice and beans, something healthy.”

The fledgling Hudson Valley Brewery in Beacon plans to open to the public at 7 East Main St. within the next two months, according to owner John-Anthony Gargiulo, although the beer is ready to be poured. “We filled those barrels eight months ago,” said brewer Jason Synan.

One of Synan’s techniques is to blend mature, oak-aged beer with fresher beer. “It enables you to have a depth of character and complexity but beer that is also very bright and fresh.” The brewery uses mostly mixed culture fermentation, a traditional European process that produces sour beer. 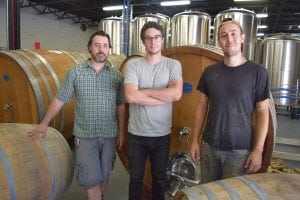 Like most craft breweries, Hudson Valley also produces IPA, although Synan said he feels tastes are changing. “The trend is toward a fragmentation,” he said. “We’re starting to see a northeast style of IPA, which is far less bitter than a west coast IPA.”

Gargiulo said the brewery will focus on the Hudson Valley and New York City markets but hopes to expand to Long Island. For now it produces only draft beer but hopes to sell 16-ounce cans of its double IPA at the brewery and possibly bottles of its sour farmhouse ale.

As for expansion, the brewery has a 30-barrel fermenter but no plans to double or triple that. “We’re interested  providing as much variation as possible” rather than volume, he said. He said fewer people are committed to drinking the same type of beer but will remain loyal to a brand.