Twelve years ago, when Beacon officials began drafting the city’s first comprehensive plan, there was a sense it had just reached a turning point.

“Every couple of weeks, there would be a new storefront that was being renovated on Main Street,” recalled Sara Pasti, who served on the City Council from 2008 to 2013 and is co-chairing with Councilperson Peggy Ross a committee that is updating Beacon’s comprehensive plan. “It became very clear that Beacon was being looked at by developers. We could already see that [it] was the time to do a plan.”

Today, Beacon finds itself again at a critical point as city officials navigate the next phase of its growth. The committee of planners and architects will revise the original planning document, which was adopted by the City Council in December 2007 (available at cityofbeacon.org), and add chapters on the waterfront/Metro-North train station area as well as recommendations for zoning changes. The updated plan will guide virtually all elements of growth in Beacon over the next 10 to 15 years.

The first public meeting to discuss the comprehensive plan is scheduled for 7 p.m. on Thursday, Sept. 22, at the Memorial Building at 413 Main St. 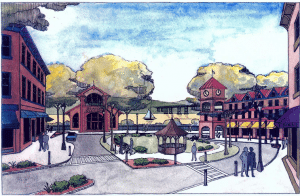 “It’s important that the public is involved in this process from the start,” said Beacon Mayor Randy Casale. Not only is this residents’ best chance to voice opinions regarding the city’s future, he said, but the workshop should offer insights into the complexities of urban growth.

“We have to understand that we are a city,” he said, “and for us to be successful there has to be development. We have to replace our old infrastructure whether we   have 10,000 or 20,000 people here. But it has to be smart growth.”

Adopted in December 2007, the existing plan fills 149 pages with dozens of maps and charts. It outlines eight main initiatives in chapters describing how to manage Beacon’s environmental and historic resources, commercial and residential development and recreation and community facilities.

Each initiative includes a half-dozen or more goals and objectives, such as preserving open space corridors along Fishkill Creek and the Hudson River; increasing housing density near Main Street and the waterfront; encouraging new housing in former industrial sites along Fishkill Creek; cultivating the city’s artistic community; and improving public transportation in the business district and along the waterfront.

“We’re seeing some of the benefits of that [plan] now,” Casale said, citing the housing being constructed on the east end of Main Street and the city’s 71 acres of parkland within its five square miles.

The Sept. 22 forum will be the first of two public sessions, with the second expected to take place in November. A draft could be ready for review by the City Council (which would include a public hearing) by early 2017.

In addition to an increased focus on the waterfront, Ross said she hopes residents will provide input on traffic and parking, commercial development and even the effects of climate change.

“We’re a growing city, and we want to bring everyone along,” Ross said. “Beacon is different. This is our opportunity to become the destination for the area.”

The consulting group BFJ Planning will lead the Sept. 22 forum. After the workshop, committee members plan to visit a number of stakeholders, including seniors and churches, to gather additional feedback, Pasti said.

“It’s thrilling,” she said. “Everyone has a different idea about how to get to where we want to be, and that’s how you use community input. Beacon is a community that’s interested in what it will become, and this is the time.”