Sean Scully doesn’t typically do small gallery shows, but in this case he will be exhibiting in the hamlet of Garrison, because Executive Director Carinda Swann had the gumption to ask.

The exhibit, called BOOK, opens on Sept. 17 and continues through Nov. 6. It is unlike anything the artist, best known for his monumental works, has done. Swann calls it a “visual biography” while Scully wrote last year in a note to the gallery that it would be “my book,” with “the references both affectionate and formal that support me and interest me as an artist, and as a human being. It is an assemblage of photos, drawings and writings that lie behind everything I make.” Swann says that Scully, even 10 days before the opening, hadn’t told her everything that will be included. 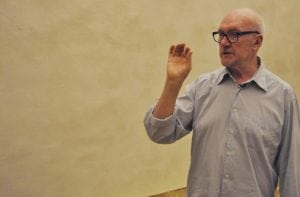 Born in Dublin in 1945, Scully grew up in South London. He was educated at Croydon College of Art at Newcastle University and received a graduate fellowship at Harvard College in the 1970s. Most of his work is abstract, with colored grids of squares and stripes, resembling, in the words of critic Mark Lawson, “playing boards for games not yet invented, or the flags of imaginary countries.” Scully is noted for layering and manipulating paint, creating a sensual, tactile texture as he does.

The artist was introduced to Garrison Art Center when his wife, Liliane Tomasko, exhibited there in 2013. He then curated an exhibit for the gallery called Romanticism, noting at the time, “My work is really based on a kind of idealism and romanticism with beauty and form and profundity all wrapped up.” 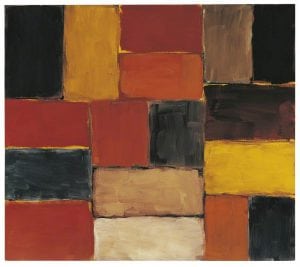 Swann sees that connection. “The place where one powerful shape of color meets another becomes a place of luscious rendezvous,” she says of his abstracts. This approach to abstraction is one way that Scully continues the concept of glorification, a cornerstone of Romanticism. “I am not fighting for abstraction,” he has said. “Those battles have already been fought. I’m using those victories to make an abstraction that is, in fact, more relaxed, more open, and more confident. I am trying to make something that is more expressive and that relates to the world in which we live. In that sense my abstraction is quite figurative. It is not very remote.”

Swann wanted to highlight a largely unseen side of the artist. A near-figurative rendering of his young son is included, and Scully’s words speak to an elevation of feeling: “I simply cannot think that human beings will be able to discard their desire and need for something that is sublime, something that transports them, takes them out of time, takes them out of the banality of the everyday world.” 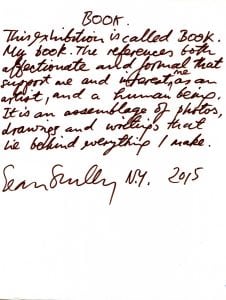 Sean Scully’s 2015 note to Garrison Art Center as to what to expect with ”Book.”

The relatively small size of the Art Center galleries, which are by far more diminutive than the usual haunts for Scully’s work (e.g., the collections of the Metropolitan Museum of Art, the Museum of Modern Art, and the Guggenheim Museum in New York City, the National Gallery of Art and the Smithsonian American Art Museum in Washington, D.C., The Art Institute of Chicago, the Fine Arts Museum of San Francisco, the National Gallery of Australia, the Tate Gallery in London and the Irish Museum of Modern Art in Dublin) may have assisted in the tailoring the exhibition.

“This is not the kind of show he would do at one of his large galleries,” Swann says. “This is a look back.”

Swann, who will be retiring at the end of the year, credits the ability to mount the exhibit, along with several others featuring renowned artists, to the funds raised by the center’s Leadership Circle. “That group has really played a critical role in the Art Center’s ability to offer exhibitions of this kind of caliber,” she says. “There is money needed for transporting art, producing catalogues, a million things, and they have found those funds.” 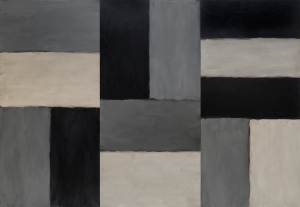 Doric Sky (2011), from Scully’s Doric series. Neither of these two paintings are in the Garrison show but give an idea of Scully’s style.