The Putnam History Museum will honor Bill Hicks at its annual gala on Sunday, Sept. 25 at the Highlands Country Club in Garrison. The event begins at 5 p.m. Hicks, a longtime former Garrison resident, will receive the General Israel Putnam Trailblazer award for his leadership at the museum. 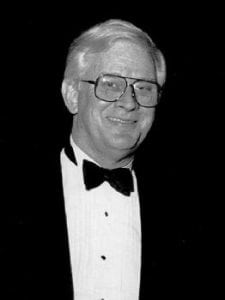 Bill Hicks when he joined the PHM board 20 years ago.

From 2013 to 2014, Hicks spearheaded a re-conceptualization if the museum’s permanent West Point Foundry gallery, which includes a restored 10-pounder Parrott cannon as its centerpiece. He has also given generously of his expertise from his career in theater, politics and fundraising to the Constitution Island Association, Constitution Marsh Audubon Sanctuary, Desmond-Fish Library and Army Gymnastics Endowment. Hicks and his partner (now spouse) of nearly 50 years, Bill Sadler, reside in Chapel Hill, N.C., and Greenwich Village.

The museum will also honor the Bell family of Garrison with its Historic Family Award.

To purchase tickets, which start at $275, visit eventbrite.com. The gala is chaired by Dorothy and Jim Klein. For more information, call Rachel Ornstein at 845-265-4010.