A four-year legal skirmish between Putnam County officials and the Journal News over the names and addresses of licensed gun owners took another step toward resolution on Sept. 19 when a four-judge state appellate court ordered county officials to release the data.

The battle began in 2012, when then-clerk Dennis Sant received a Freedom of Information Law (FOIL) request from the newspaper, a Gannett-owned daily based in White Plains, for the identity of all registered gun owners in the county, which at the time numbered about 11,000, including the models and serial numbers of their handguns. (New York does not require permits for rifles and shotguns.)

Under state law, the registrations are public information.

The Journal News had already obtained the handgun records in Westchester and Rockland counties and used the data to create an online map that identified where each owner lived. The editors said the map was a response to the Dec. 14, 2012, school killings in Newtown, Conn., and the subsequent debate over gun control. It argued its readers “are understandably interested to know about guns in their neighborhoods.” 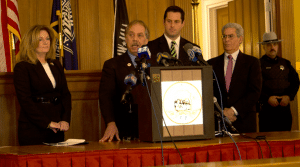 Sant denied the FOIL request, citing public safety. “I’m a man who follows the rule of law,” he said at a press conference in January 2013. “I’ve never denied a FOIL request in my 28 years as a FOIL officer … But it’s not about the rule of law anymore, we’re talking about the safety of citizens.”

County Executive MaryEllen Odell backed Sant (who has since retired), arguing that Putnam is home to many law enforcement officers whose lives might be endangered if the information was released.

That same month, Gov. Andrew Cuomo signed into law the Secure Ammunition and Firearms Enforcement (SAFE) Act, which allowed permit holders to remove their names from the public database. Gun owners already in the system had four months to opt out. When that grace period ended, the Journal News filed another FOIL request, which Sant denied. 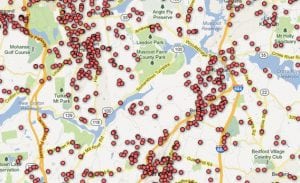 A screen shot from the Journal News gun owner map, which was removed in January 2013. By clicking on a red dot, a visitor could see the handgun owner’s name and address.

The newspaper sued, and in March 2014 acting State Supreme Court Justice Robert Neary told the county to release the information, writing that the SAFE Act “unequivocally directs the public disclosure of names and addresses of license holders who did not choose to seek an exemption.” The county appealed, which led to the unanimous Sept. 19 ruling that again ordered the county to release the information. It turned away the county’s argument that the Journal News only wanted to sell newspapers or that disclosure would be “offensive and objectionable to a reasonable [person] of ordinary sensibilities.”

Putnam officials have previously vowed to appeal again, which would put the case before the New York State Court of Appeals. But because the ruling unanimous, the court must grant permission for the county to appeal.

Journal News Executive Director Traci Bauer told her newspaper that while the company was pleased with the ruling, it “has no plans to revisit the information on gun permits.”

During a forum in Carmel earlier this year organized by the Putnam County Firearm Owners Association, Odell said that regardless of the repeated court rulings against its position, the county would not drop the case. “We have a plan,” she said. “There will be no retreat; there will be no surrender.”

Michael Bartolotti, who succeeded Sant as clerk, said at the forum that his office would “fight this to our last breath.

“There is no way they are entitled to this information,” he said.