The teams competing in the 10th season of The Fireball Run, a reality show that streams in real-time on Amazon and airs on television in Europe, will make stops in Beacon on Wednesday, Sept. 28, and Mahopac on Saturday, Sept. 30. The show tracks 40 teams of contestants as they drive 2,000 miles in a seven-day “epic quest for America’s most obscure and historic artifacts” while promoting the national search for missing children. 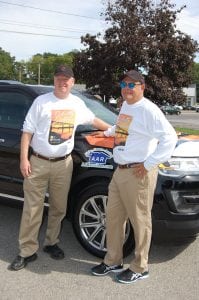 The hometown teams are Distinctly Dutchess (Rick Brownell, owner of Freedom Ford, his wife Nancy Rossi Brownell, vice president for Putnam for the Community Foundations of the Hudson Valley, and auctioneer Robert Doyle). They will be driving a 2016 Ford Explorer. Team Putnam (Johnny and Sean) will have a Shelby GT500.

On Wednesday, Sept. 28, the teams will arrive on Main Street in Beacon near Hudson Beach Glass at about 3 p.m. and stay for three hours before being escorted by police to Poughkeepsie for a ticketed dinner at the Poughkeepsie Grand. They will depart the next day for Saratoga County at 10 a.m. from Poughkeepsie City Hall.

On Friday, Sept. 30, the teams will arrive in Mahopac at about 2 p.m. and the cars will be on display until 6 p.m. At 3 p.m. the Italian American Club of Mahopac hosts its Evening in the Piazza at Chamber Park.

The teams depart the next morning at 9 a.m. to finish the race in Amesbury, Mass.