Decade-old proposal for hotel and conference center set aside

Scenic Hudson has asked the Beacon Planning Board for approval to expand its riverside Long Dock Park with a plaza, boardwalk, walking path, seating pavilions and 26 new parking spots. A public hearing is expected in October. If the board approves the plans, Scenic Hudson could break ground early next year.

Since it opened in 2011, the major attraction of the 15-acre Long Dock Park has been a pavilion that provides easy access to the Hudson for kayakers. From there, the park extends inland to the Klara Sauer running path, which would eventually tie into the proposed Beacon-to-Cold Spring Fjord Trail, with which Scenic Hudson is also involved.

Long Dock’s boundary to the north is the River Center, the restored “red barn” where Scenic Hudson holds arts and environmental programs.

Its plans call for creation of a plaza adjacent to the kayak pavilion with a boardwalk, riverside path and pavilion seating. The new parking spots would bring the total to 87. Scenic Hudson has also requested bids from food trucks to operate on the site.

“There are not a lot of places in Beacon where you can pop down and get a bite to eat,” explained Meg Rasmussen, a Scenic Hudson park planner. “You’ll be able to sit out and watch things going on at the kayak pavilion or on the river. We’ve found that many activities evolve organically [at the park], so a lot of our events are driven by what the community brings to us.” 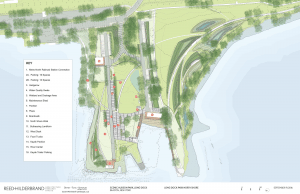 Scenic Hudson’s plan is a dramatic downshift from what it had proposed nearly a decade ago, when it planned an environmentally friendly hotel and conference center at Long Dock. That vision evaporated after the economic downturn of 2008 and again after severe flooding caused by Hurricane Sandy.

When the non-profit first shared its proposal with the Planning Board over the summer, there was pushback from board members who still hoped to see commercial development. Chair Jay Sheers in June called the change of direction “very disappointing,” but by August the tone seemed to have softened when board member David Burke volunteered that food trucks were the “perfect solution” to introduce dining at the park.

Rasmussen said the idea of a commercial development in the park was long considered by Scenic Hudson. “We took a really hard look at it,” she said, “including research on the economics of a restaurant.” But the organization determined that it was not the best place for the project, given its history of repeated and, at times, catastrophic flooding. 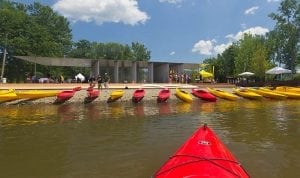 With that in mind, the group began designing what she called “a park that will flood,” with elevated parking and meadows where flood waters can infiltrate into the ground.

Once home to a dilapidated junkyard and oil storage facility, the Long Dock site was purchased incrementally by Scenic Hudson beginning in 1996. Since its opening, the park has become popular not only as a kayak launch but for outdoor educational programming, yoga classes and the annual Pumpkins in the Park jack-o-lantern lighting festival.