The public comment period for the first phase of the state’s Environmental Impact Review of the Hudson Highlands Fjord Trail is open through the end of September and a public hearing will be scheduled soon. Comments can be emailed to [email protected] or mailed to Nancy Stoner, Environmental Analyst, NYS Office of Parks, Recreation & Historic Preservation, Albany, NY 12238.

An outline of what the environmental review will cover can be downloaded at hudsonfjordtrail.org. The Town of Philipstown is also about to begin its own review.

The trail is a fine and ambitious idea. It addresses at long last the extremely hazardous mix of hikers and vehicles along Route 9D. The redesign of the section from Little Stony Point to the Breakneck Metro-North stop is an urgent need. And extending the trail to Beacon is downright visionary.

The part that is not visionary is to start the trail at Main and Fair streets in Cold Spring. The master plan draft shows Fair Street as the route heading north and Church Street as the southbound trail. (See hudsonfjordtrail.org/master-plan.) As those of us who live on Fair Street can attest, it has borne the brunt of increased vehicular and pedestrian traffic in and out of the village to the north. This is not a quiet side street. There is much truck traffic, with even the largest tractor-trailers rumbling by. We get the speeding commuters late for the train and the speeding churchgoers late for services. On busy summer weekends the pedestrians come by in such numbers that many walk in the street.

Now the plan is to invite more — potentially many more — hikers and bikers to share this space. The risks the trail is designed to decrease on 9D will increase on Fair Street. 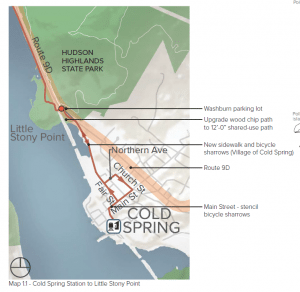 Detail from the preliminary draft master plan for the Fjord Trail

In a 2009 report, the village’s Special Board for a Comprehensive Plan envisioned a riverside walkway leading to a bridge over the Metro-North tracks to the village garage property, past the municipal lot to Fair Street and the Fjord Trail. The 2011 Local Waterfront Revitalization Strategy report preferred the possibility of an underpass (rather than an overpass) from Dockside to the village garage site. The 2012 Comprehensive Plan offered another idea. “Conduct a feasibility study to create a segment of the RiverWalk loop from Dockside with a causeway just west of and parallel to the railroad tracks to cross the tracks at Little Stony Point.”

The latter plan includes a 10-point agenda for the development of Dockside, including dining and picnicking facilities, and docking and launching, reflecting several years of public comment. (Hats off to the Film Society for their great screenings.)

Wouldn’t Dockside make a great start to the Fjord Trail? Expensive, yes. I’m told a bridge over the tracks to the village garage would cost more than $1 million (including elevators for wheelchair access). But this is a project whose budget is already in the tens of millions. Isn’t it worth at least doing the feasibility study called for in the Comprehensive Plan before committing to a route that is merely expedient and probably unsafe?

I ask my neighbors, particularly those on Fair and Church streets, to make their views on the trail route known to the state and Scenic Hudson and to the town and village boards. And I hope the village board will form a committee to assess all the possible uses for Dockside and do it before the Fjord Trail is a done deal.