Continental Village residents say their school taxes are too high

In recent months some residents in Continental Village have called upon town and state officials to resolve what they perceive as unfairly high school taxes relative to the value of their homes. If this protest has a familiar sound it is because Continental Village property owners have previously raised this issue and seemed to return to it with cicada-like regularity after spending a few years enduring their annual tax bills.

The primary grievance of residents is that although Continental Village is part of Philipstown, the homes in this hidden-away hamlet that presses up against Westchester County are within the boundaries of the Lakeland School District, an admired but expensive school system that primarily serves Westchester.

The situation is complicated by the fact that New York State has what Brian Kenney, Philipstown’s longtime assessor, calls “the most complicated tax system in the world” with many intersecting boundaries and jurisdictions and an opaque formula governing taxation rates and property values.

Residents complain their property tax bills are too high because the Lakeland School District is so expensive to operate. They feel especially aggrieved at the cost relative to the value of their homes, which are comparatively lower-priced than neighboring communities in Putnam and Westchester counties.

Further, many C.V. residents are convinced that the system for factoring real-estate taxes is skewed against them because of what is known as the “equalization rate,” which, although designed to make the system fairer, incorporates homes from more-expensive Garrison in the calculation as required by state law.

As they have in the past, Continental Village residents brought their complaint to the Philipstown Town Board while acknowledging its limited ability to solve the problem. The board, as it has done in the past, convened a meeting with state officials and residents to see if there is a way forward. The news, as always, was not encouraging.

Kenney pointed to the separate taxing authorities in school districts, water districts, towns, villages, counties and the state itself as the root cause of any high tax burden. He noted that in many Southern states, such as North Carolina, the county government usually accounts for all services, including education, creating greater efficiencies from his perspective. 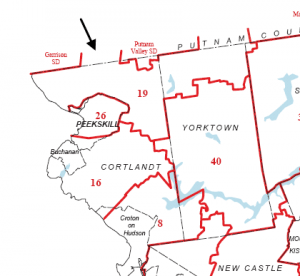 Kenney spoke at the Philpstown Town Board on Sept. 8, when it met at the Continental Village Firehouse. The board also invited John Wolham of the state’s Department of Taxation and Finance to explain how property taxes are calculated. State Assemblywoman Sandy Galef and a representative from State Sen. Sue Serino’s office were also present.

Wolham, a regional director for the Real Property Tax Division, reprised a presentation he made in 2011 on the relationship of school budgets and property tax bills. He walked the audience through a school district deciding on the annual budget (with increases restricted by the state tax cap), identifying other sources of income such as state aid and then determining what property tax rate is needed to meet the district’s expenses.

He also explained the equalization rate process, which is intended to provide “rough justice” in accounting for differences among towns in the way they do and don’t handle the assessed valuations of homes. State law does not require a town to assess properties at 100 percent value, so years can pass between uniform reassessments. Putnam towns have generally kept more current with market values; some Westchester towns haven’t reassessed in decades.

However, Wolham said this variation doesn’t account for what Continental Village property owner perceive as unfairness in the system. He also said the fact that the idea that the equalization rate applied to Continental Village homes is skewed by the expensive homes in Garrison doesn’t compute. He said a review of 15 years of Philipstown’s equalization rates revealed only a small margin above the state average.

“From our perspective, the best recommendation we can offer to insure a fair apportionment and fair property taxes at the individual level is to do what is known as a re-assessment,” said Wolham. While many residents embraced that idea, officials threw cold water on it.

Galef, who chairs the state assembly’s Real Property Committee, said legislation to require regular updating of real estate assessments has gone nowhere for years in the legislature. Members, she said, fear the consequences of demanding that communities reassess, which can lead to big tax increases for some property owners (and reductions for others).

Philipstown Supervisor Richard Shea said a state law requiring towns and cities to reassess but that didn’t also provide the funds to do so would be useless. Towns are handcuffed by the state spending tax cap and could not consider doing a reassessment on its own, given the estimated cost of more than $300,000. A countywide reassessment was last done in 1996.

Kenney told the Continental Village residents their problem stemmed from a high-priced school district and that the only real option was merger with another, less-expensive district. He said it was “ridiculous” that state law permitted school districts such as Garrison to go without paying toward supporting a high school, creating a tax-rate disparity with Continental Village and residents of the Haldane school district. Garrison’s rate per thousand dollars of assessed value is approximately half that of surrounding Philipstown areas.

Michael Leonard, a town board member and Continental Village resident, has spearheaded efforts to find a resolution. “This is one in a series of meetings we have been hosting with C.V. residents about this issue,” he wrote in an email. “I suggested we have what I call an ‘options’ meeting to discuss any and all possible options not knowing at this time if they are legally allowed or whether they even make financial sense or do the majority of C.V. residents even want to do it? But those are things you discover when you look into each option. You don’t want to eliminate any idea right now.”

Some residents are getting behind the idea of withdrawing from the Lakeland district. But it remains to be seen if parents of school-age children would get behind that effort.

4 thoughts on “Caught Between Two Districts”