The Volkssport Club at West Point may call the military academy home, but members and friends of the walking club lace up their shoes to explore well beyond its grounds. Volkssporters — the root translates from the German as “sports for the people” — walk routes of 5 or 10 kilometers (3.1 or 6.2 miles) on both sides of the Hudson.

The concept took hold in 1968 in Germany when public running clubs from four countries organized walks in which participants were awarded for achievement, not time. The first volkswalk was held in the U.S. in 1976, and soon after an organization now known as the American Volkssport Association was formed.

Today the AVA has about 300 chapters in all 50 states that sponsor a collective 3,000 events annually. In New York state there are clubs at West Point, Albany, Buffalo, Central Valley and Cortlandt. Walking is by far the most popular volkssport, but participants also hike, bike, swim, cross-country ski and snowshoe. 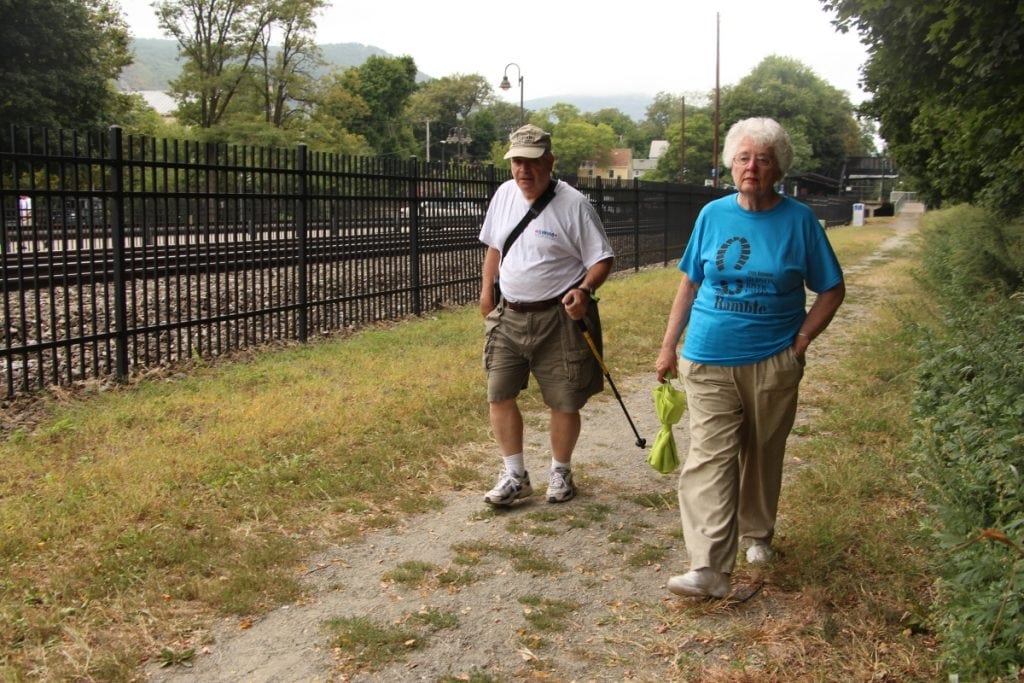 Armen Nishanian of Larchmont and Nancy Patrick of Fort Montgomery on the Cold Spring Volkswalk (Photo by M.A. Ebner)

Nancy Patrick, 80, who is the West Point club’s president, chose the 5-kilometer course. “All I need are my good old New Balance or Reeboks, and some of us have walking sticks,” said Patrick, who lives in Fort Montgomery.

The West Point club, founded in 1988, has 85 members and about 300 people on its mailing list, said Joan Kimmel, who drove from Poughkeepsie. “This group welcomes everyone, families, people with strollers, you can even bring your dog as long as it’s on a leash and you pick up after it.” 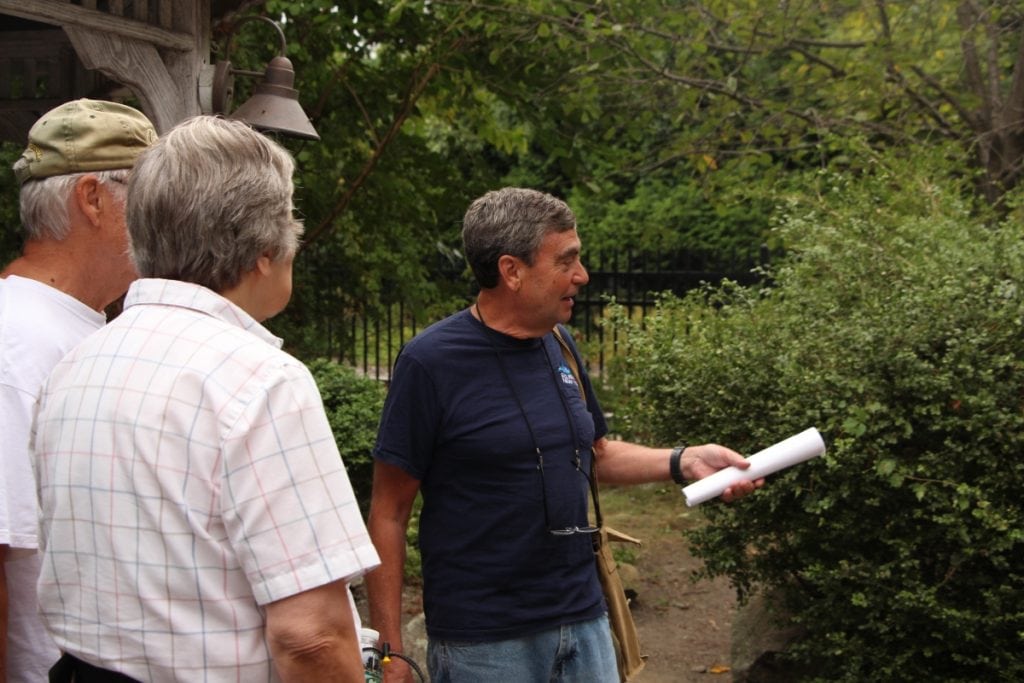 Tom Scuccimarra of Philipstown, trailmaster for the Volkssport Club at West Point, led the walk on Sept. 18 (Photo by M.A. Ebner)

Under a canopy of clouds that held back the predicted rain, the walk started on Main Street and wound through the Foundry Preserve. The 10-kilometer course continued into Nelsonville. The guide for the morning was trailmaster Tom Scuccimarra, a former judge in Philipstown, Nelsonville and Cold Spring, who shared historical details, including a description of 19th-century life in the village. He also provided a printed guide with navigational cues and checkpoint questions.

The West Point club hosts five walks each year on the east side of the river, including in Beacon, which Scuccimarra also mapped. In addition, the club has routes for the Walkway Over the Hudson, Highlands Falls, Hyde Park and Rhinebeck. On the west side, it has trails in Central Valley, Cornwall, Fort Montgomery, Highland Falls, New Paltz, Nyack and at West Point.

10 a.m. Walkway Over the Hudson

Sign-in sheets and instructions are available at each route’s start point, which in Cold Spring is the Depot Restaurant and in Beacon the Yankee Clipper Diner at 397 Main St. (The route begins around the corner at 168 Teller Ave.) Maps also can be downloaded at nodegreen.com/westpoint. Although the club organizes special events and holds monthly walks, the routes can be tackled at any time. 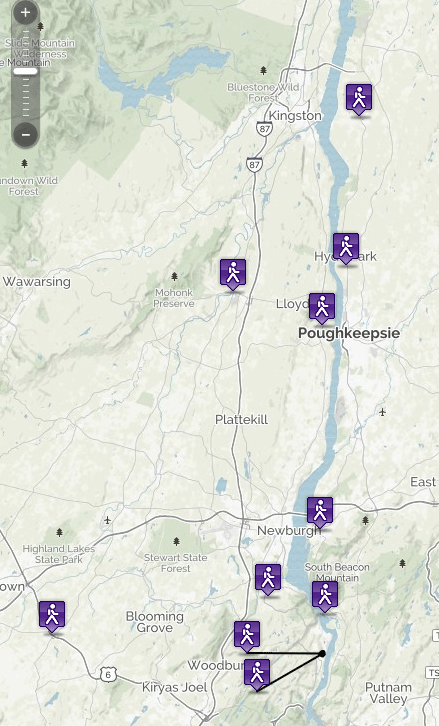 Sites of walks organized by the Volkssport Club of West Point

Andrew Schmidt, another member from Poughkeepsie, has logged more than 550 walks. He said that typically people will attend a volkssport event strictly for the exercise but make friends and become more involved. In addition, he’s a history buff, and “with many walks, like this one [in Cold Spring], we cover history. Volkssporting is not a race and it’s equally a social activity.”

That combination is what drew Armen Nishanian to drive from Larchmont for the Sept. 18 walk. “I came up for the walk and for the exercise, to see Cold Spring and the Foundry,” he said. “And I’m enjoying my Sunday morning.”

There is no fee to participate, but donations are welcome. Members pay $10 in annual dues and $3 at each event to defray expenses, which include tracking their walks in books that resemble passports. Volkssporting recognizes completion with patches, pins and, for the ambitious, the status of “50 Stater.” As the group rambled along the Hudson over a path at Foundry Dock Park, Schmidt expressed his appreciation for the club’s president.

“Nancy finished her 50th walk in her 50th state on her 50th wedding anniversary,” he said of Patrick, who, along with her husband Farrell, will leave soon for a leisurely stroll in New Mexico.